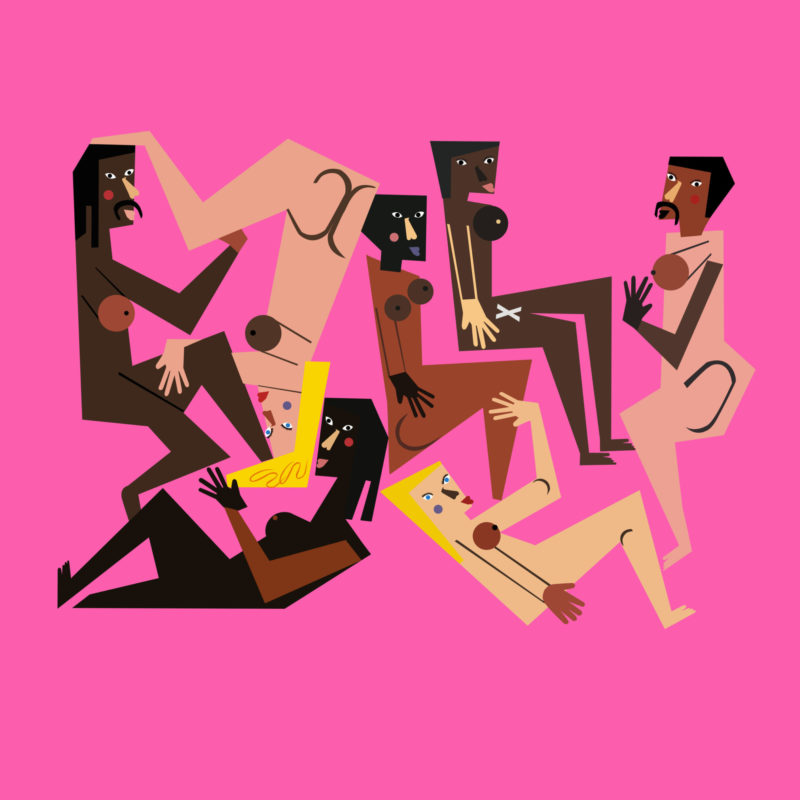 One of art’s fastest rising stars, Abney features in our current Game Changers exhibition. Find out more about her below...

1. She got her big break at art school

While Abney was completing an MA at Parsons School of Design, her thesis painting Class of 2007 caught the eye of New York gallery Kravets Wehby. The diptych, which depicted her white classmates as black prisoners and the artist as a white police officer, is an incredibly arresting and impactful visual commentary on the imbalance of both art academia and the prison system. The rest of Abney’s thesis work was also bought by the gallery and subsequently sold out in a matter of days.

The year after Abney’s thesis show, Class of 2007 was included in the seminal exhibition, 30 Americans, which took place in the vast Miami gallery space of renowned collectors Don and Mera Rubell. The Rubells, known for their knack for spotting emerging artists (including Jeff Koons and Ai Weiwei) had bought the painting from Kravets Wehby specifically for the exhibition, which brought together works by African American artists spanning the previous three decades. More than 12 years on, the show continues to travel to galleries across America: it’s currently on display at Arlington Art Museum, Texas.

Despite being only a decade into her career, Abney put on the travelling exhibition Royal Flush (a survey of her work to date) in 2017. Featuring Class of 2007 as a starting point, the show ended with the quasi-explicit Catfish, which depicts a series of naked women peering over their shoulders at an imagined camera. Like many other pieces in the exhibition, the work is a caustic commentary on the trials and tribulations of contemporary life.

Spontaneity and improvisation is key to Abney’s practice: she doesn’t plan large-scale works beforehand but instead tapes or draws off shapes and paints directly onto the canvas. And she makes her pieces deliberately bright and fun, to draw viewers in and counteract their serious underlying themes. As time has passed, Abney’s also created unique simplified shapes that act as recurring visual shortcuts in her work – the result is a unique visual language inspired by emojis.

The value of Abney’s work continues to rise. In 2021, Untitled (XXXXXX) sold at Christie’s for $990,000, smashing its high estimate of $300,000. However, her joyous collabs with much-loved brands make for more accessible investments: Abney’s limited edition Uno deck, developed in conjunction with Pharrell Williams’ Black Ambition Foundation, is packed with her trademark portraits. The artist has also created skateboards as part of a collaboration with The Skateroom and Peanuts, rendering Snoopy and Woodstock in her trademark squared-off and flattened way, so that they appear to have jumped straight into her world.

Mattel / This is Colossal

To see the work we have available by Nina Chanel Abney, click here. Take a look at our Game Changers exhibition here.