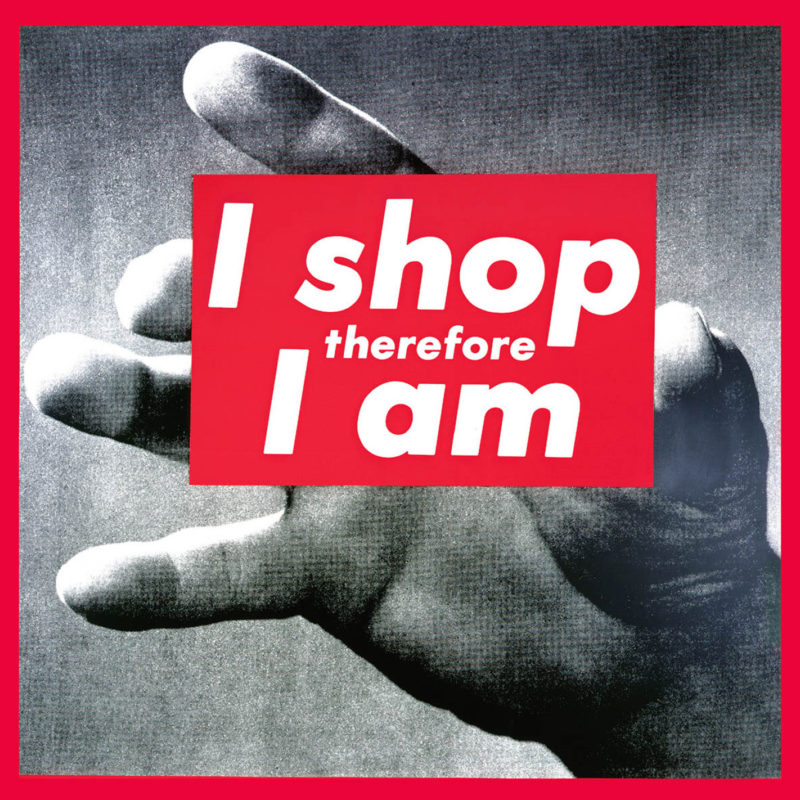 We take a closer look at the American artist's iconic typography and forthright feminism. Here are five things you should know about this master of bold statements...

1. She doesn’t mince her words

Best known for her bold, emblematic slogans printed over found black and white photographs, Kruger’s strong feminist and anti-consumer messages were born in the early 1980s as a reaction to the narratives around societal pressure to conform (especially on women). Her words are often critical, fierce and thought-provoking: Among the artist’s most famous pieces are the iconic 1989 screen print Untitled (Your Body Is A Battleground) (conceived at a time of emerging supermodels and a fitness fixation) and 1987’s Untitled (I Shop Therefore I Am), which questioned the consumerist whirl of the decade. Latterly, Kruger has explored our evolving narcissism and social media obsession in large-scale works and video installations such as 2020’s Untitled (No Comment).

Barbara Kruger – Untitled (Your Body Is A Battleground), 1989, installation view, The Broad, LACMA.

2. Her style has spawned some commercial carbon copies

If Kruger’s work reminds you of the logo of a certain iconic streetwear brand, you wouldn’t be the first to draw comparisons. Rumours abound that Supreme’s founder James Jebbia lent its graphic designer a book on the artist in the brand’s early days and the company’s logo uses Kruger’s signature font, Futura Bold Italic, in white on a solid red background. Kruger is usually philosophical about the commercial appropriation of her style, but when Supreme attempted to sue Married To The Mob for appropriating its logo, the website Complex asked the artist for her opinion. She replied in characteristic gusto with a Word document entitled ‘fools.doc’, which contained this no-holds-barred message:

"What a ridiculous clusterfuck of totally uncool jokers. I make my work about this kind of sadly foolish farce."

Kruger’s been using the streets as a gallery since the very beginning of her career, when she would plaster them with her homemade posters. Back in the 1980s, the artist’s pieces found themselves in New York’s Times Square as part of a project by the Public Art Fund (among the billboards was one with the slogan, ‘I’m not trying to sell you anything’): it was at this time that public works became a key part of Kruger’s practice. Three decades later, she continues to exhibit outside. In 2020, she took to the streets of LA as part of Frieze, adding her trademark white-type slogans to green backgrounds as part of a project that asked such questions as ‘Whose Justice?’ and ‘Who wins? Who loses?’.

Untitled (Questions), October 2020 at The Geffen Contemporary at MOCA

4. She found her feet in magazines

Though she studied for a year at the prestigious Parsons School of Design, it was at mega magazine house Condé Nast that Kruger first found her artistic feet. In 1966, she took her first design job with Mademoiselle; by the end of the year she’d made Head of Design. She continued to work in magazines until the 1970s, and since then her pieces have made iconic cover art for publications including Esquire, Dazed and Wallpaper. But it’s her work with New York magazine that really made the headlines. Back in 2016, Kruger emblazoned its cover with a black and white photo of then-President Trump sneering, adding the word ‘loser’ in her trademark type. In 2018, she returned to the magazine and the theme, commenting on Trump and Putin’s relationship by swapping the first letters of their names on a bold cover that read ‘Prump Tutin’.

5. Her largest exhibition in 20 years is on now

For the first time since 2018, Kruger has a solo exhibition – and it’s gargantuan (the largest exhibition of her work in two decades). Thinking of you. I mean me. I mean you. is set in and around the Art Institute of Chicago and includes video installations, works on vinyl, animation and installation: among the pieces are signature works on bus shelters, billboards and metro stations that signal a city-wide takeover. The exhibition will remain in situ until March 2022, before moving on to the LA County Museum of Art. Though the show features work from the 1980s right up to the present day, Kruger has been at pains to stress that it is not a retrospective and that much of the work has been remade to reflect the shifts in society up to the present day.