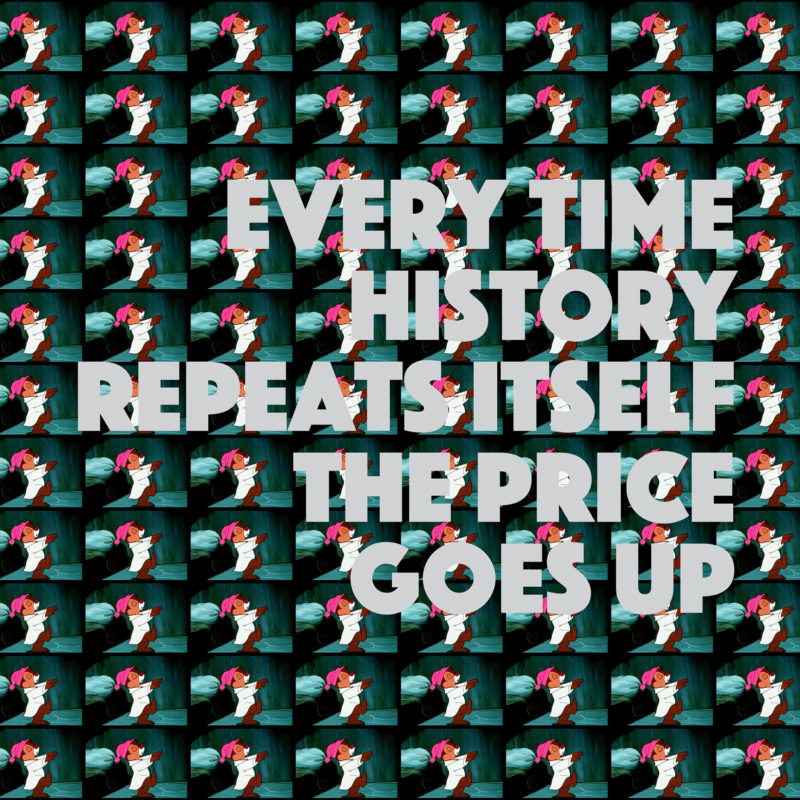 'Repeat After Me' is the inaugural exhibition by London-based artist Oddly Head at Hang-Up this August. We caught up with the artist to discuss his brand new works, 99 Problems, politics and much much more...

This is your first solo show, and it’s at Hang-Up..we’re very excited! How are you feeling?

I’m thrilled to tick ‘have a solo show of my artwork’ off my bucket list! I’m very grateful to Hang-Up for the opportunity. I’m also gratified that it’s this current body of work that’s won me this opportunity. I’m really happy with the work. That’s not something I feel very often.

Why Hang-Up to launch the new works?

I identified Hang-Up as the London gallery I wanted to approach as soon as I began making artwork as Oddly Head towards the end of 2014. If I remember rightly, it was my wife, Becky who first telephoned Ben to introduce him to my work. Shortly after that I met Carla and happily, Hang-Up have represented my work ever since. I never felt the need to reach out to another gallery in London and felt that if I kept developing my ideas, sooner or later Hang-Up would offer me a solo show.
Why Oddly Head? Give us a brief background
I would love to but I can’t! It’s not an attempt to be mysterious but there are reasons why I can’t discuss this in print. 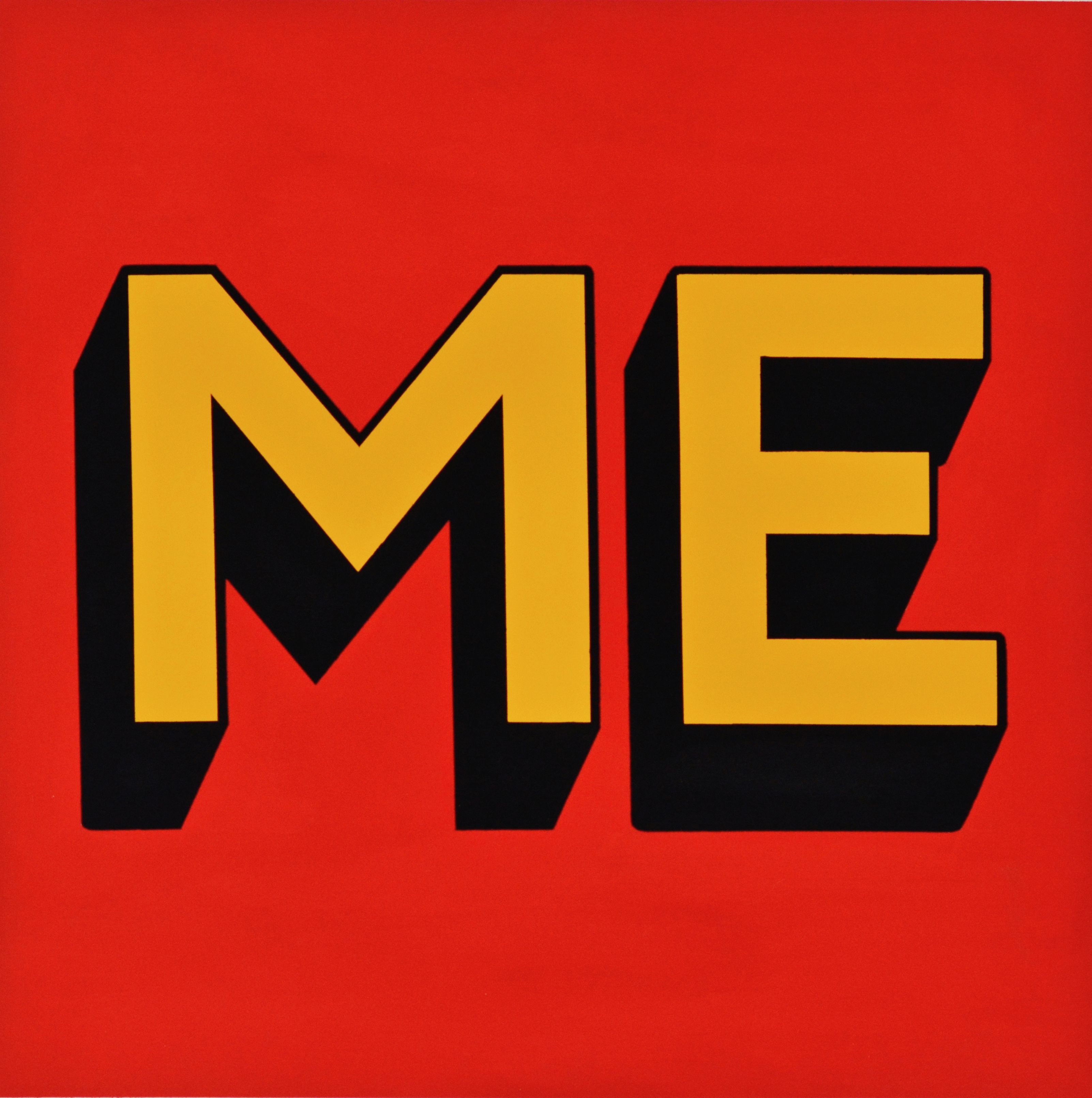 REPEAT AFTER ME — what was the catalyst for this show?

I began making the ME pieces at the beginning of this year but it wasn’t until I made A Lot of Bad Dudes and The End that the everything felt it was falling into place. Those two pieces felt like a good bridge from my collage work to a new approach of marrying image with text. I’ve made text-based design work for over 20 years and so it felt very comfortable to bring that to my artwork. Building on this technique with All Watched Over and In Every Dreamhome seemed to give the ME pieces more weight. It felt that I’d created a body of work that spoke for itself. 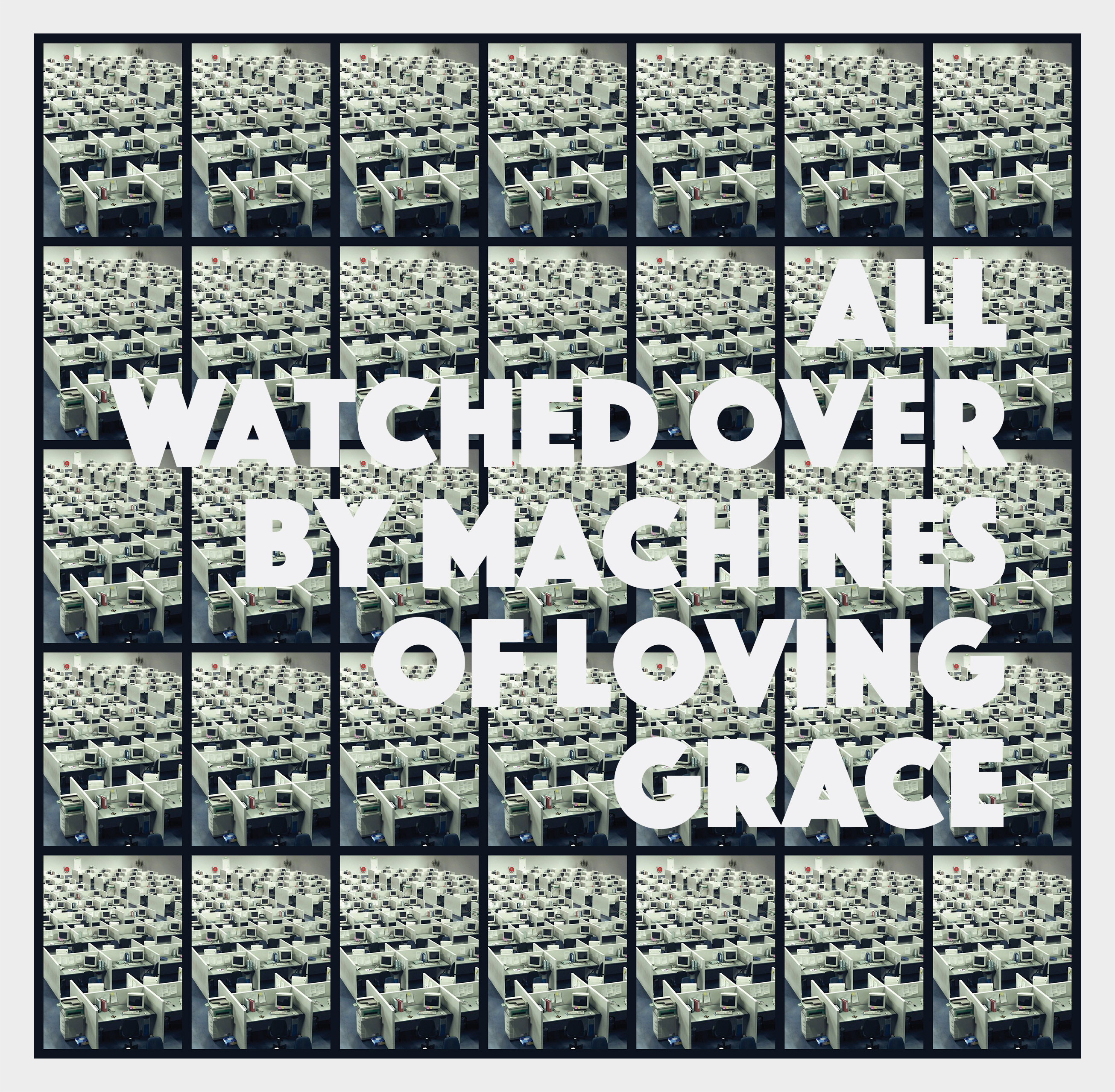 The new series sees a pattern in repetitive appropriated imagery. Where do you source this from?

Pinterest is a good place to begin in a hunt for images. That initial search tends to take
me deeper into the internet where I’ll go off on all sorts of tangents. The image used
in Every Dreamhome came from a huge collection of copyright free images released by NASA.
Sometimes, I’m looking for an image to match an idea or some text and other times the image
suggests the idea.
As an artist, has this political/social direction always been intended? Has this always been your intention as an artist or has it come as a result of the predicament that the world is currently in?
I’ve spent most of my career creating work that wasn’t political at all. Oddly Head was born to allow me the opportunity to create artwork that said something. It’s therapeutic for me. Even without the seismic political events of the last couple of years, I’m sure that I would have found enough material to work with.
What is your favourite piece from the show?
Definitely the 2 large repeated ME pieces. They were pleasing to make and I really enjoy the scale of them. I’d like to make a lot more.

When you’re in the studio, what is your work process? Are you messy/neat? 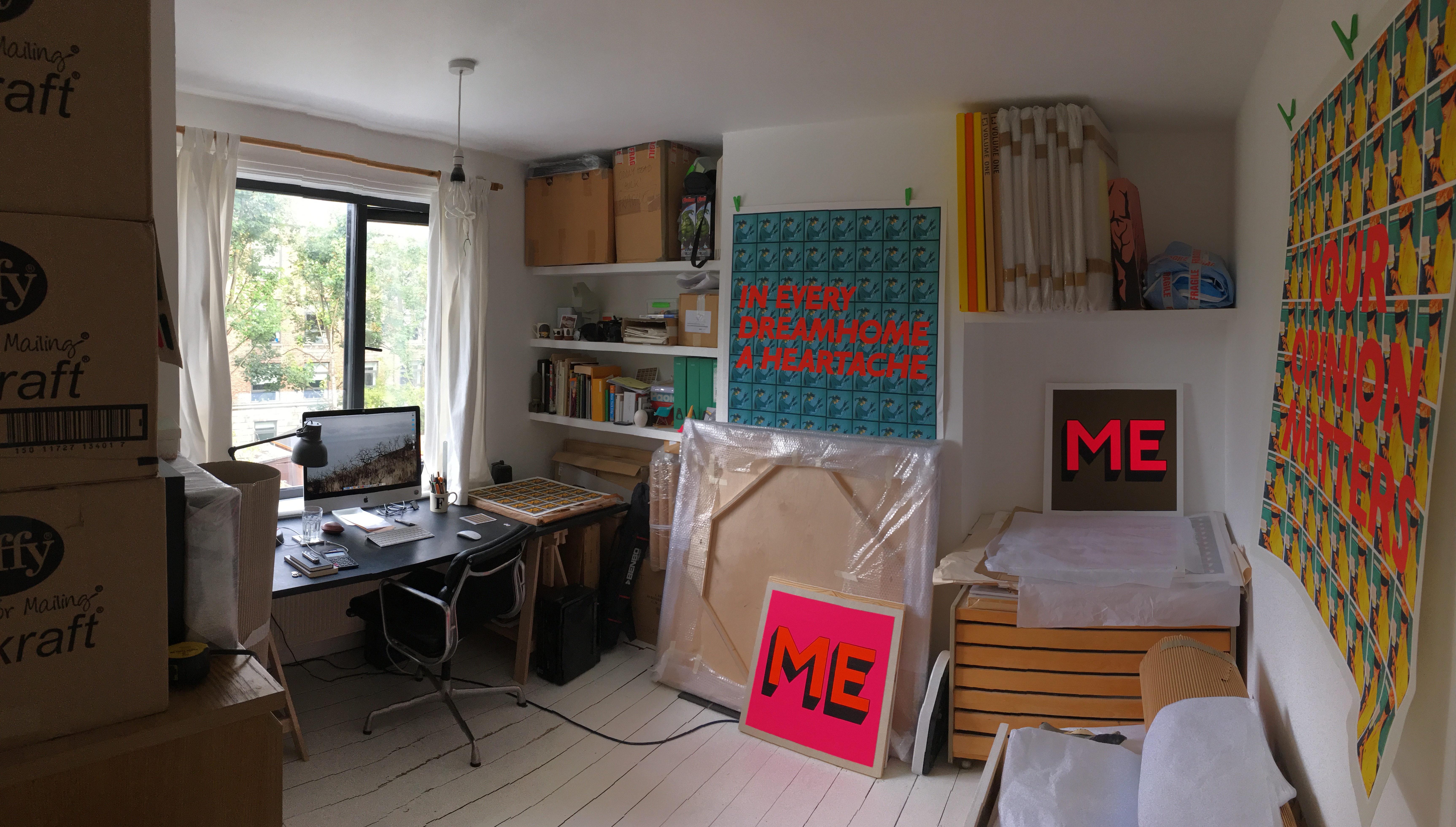 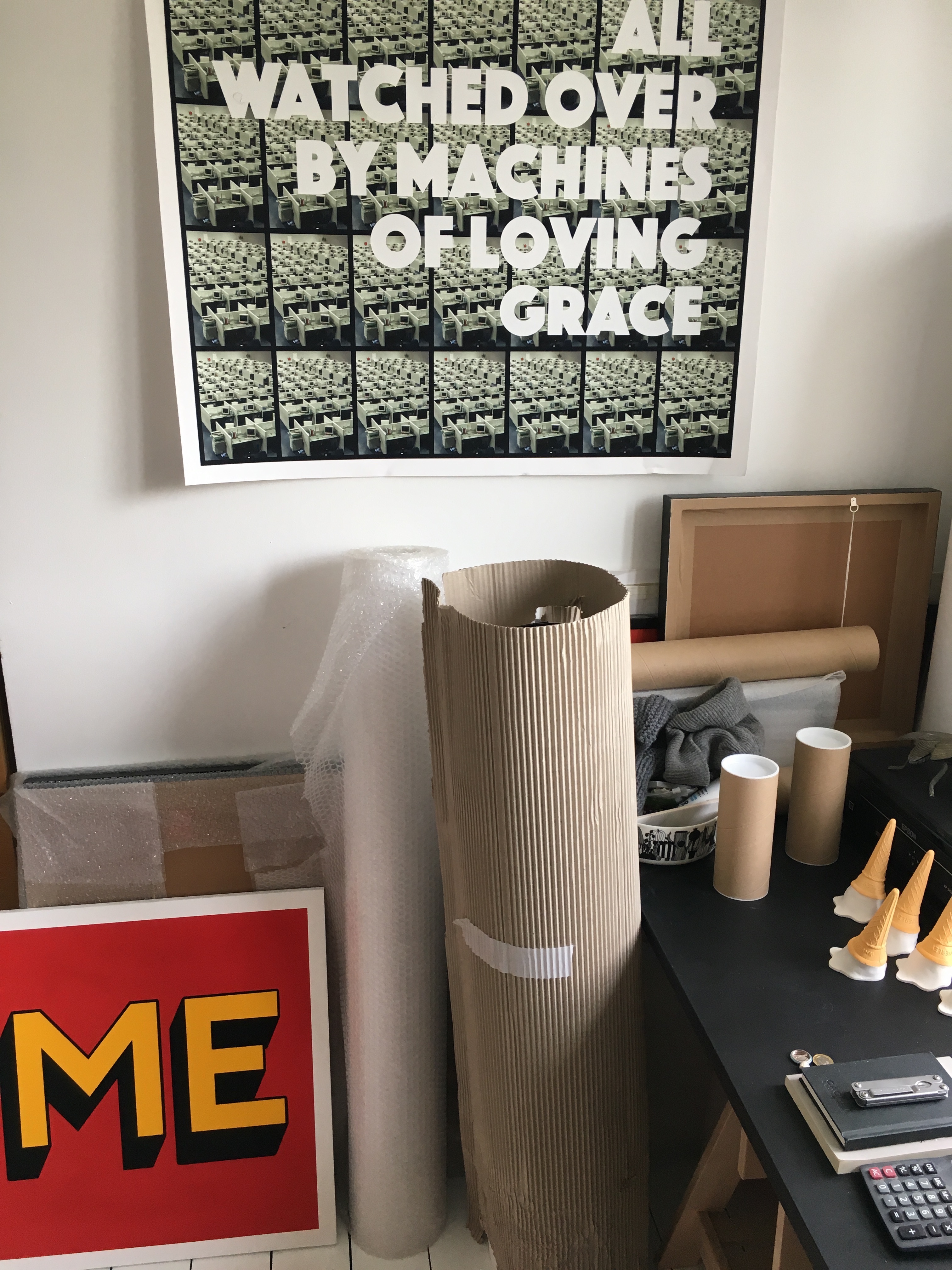 Who or what are your influences - inspirations, art, music, muses…?

I really love it when people I’m interested in are interviewed and give lists of their favourite music/films/places etc. There’s a reason why Desert Island Discs has run for so long. It’s the best way of discovering new things. I’ve bought a lot of music and books based on the recommendations of people I admire. Here are some things that inspire me: 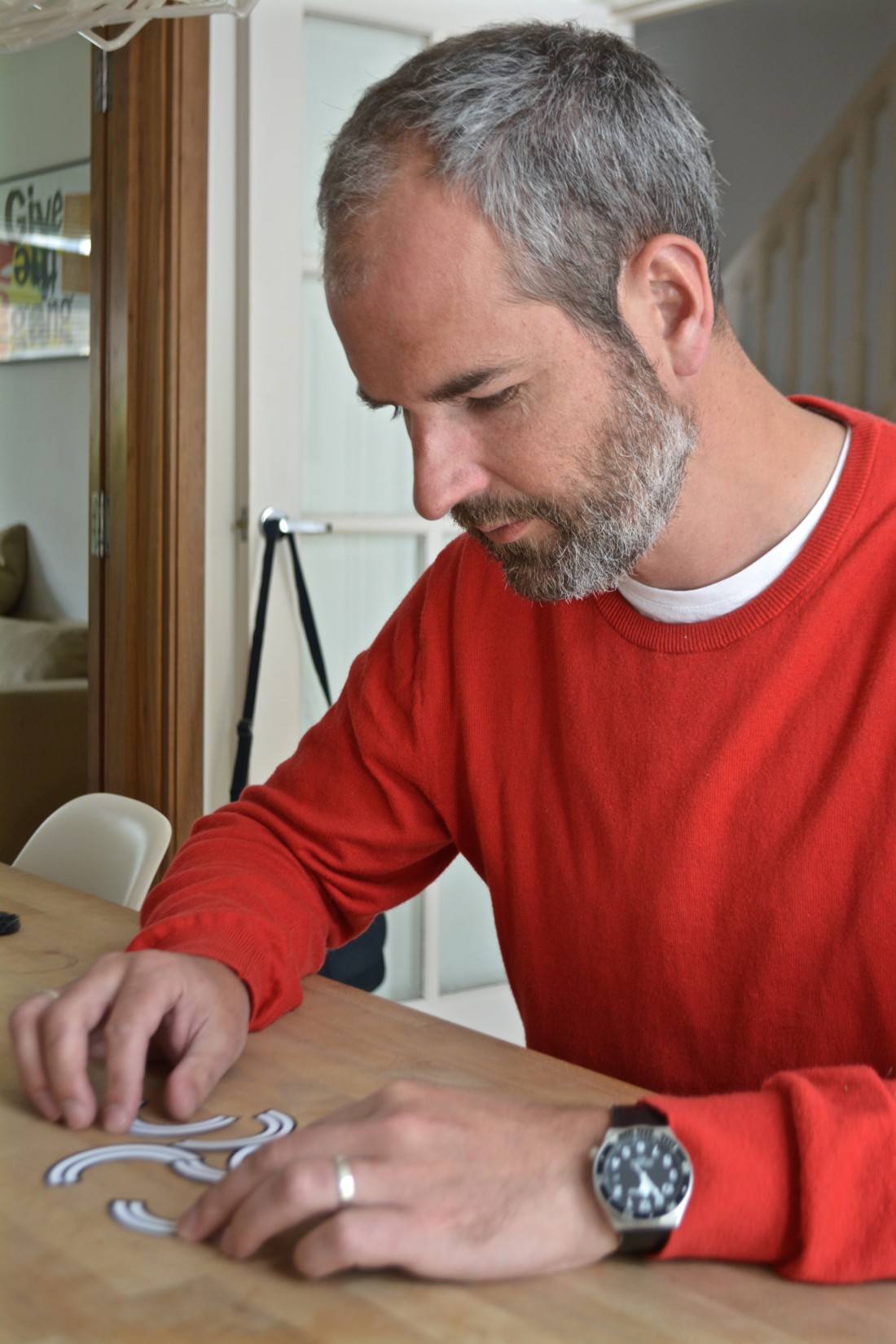 Favourite Gallery?
Lisson NYC, Tate Britain, Newport St. London, New Museum of Contemporary Art NYC
We know that you’re a big music lover. Is music a big part of your creative process?
Well, it’s always there in the background, yes. And in some instances, it actually provides the inspiration for a piece of work like ‘In Every Dreamhome a Heartache’.

As an artist, you contribute to the social situation making us aware with global issues through your art . You've asked that 10% of the profits of the ME sales from are going to the 'Médecins Sans Frontières’ charity. What is your involvement with the Charity organisation Doctors without borders? Why this organisation?

I have no previous involvement with MSF whatsoever. When I began making the series I got a little hung up on whether people would be able to embrace the idea fully enough to hang a piece above their bed that shouted ME, ME, ME. Yes, it’s an ironic statement but it also refers to the large part ego has in our purchasing of art and in the showing it off in our homes. It felt apposite that something altruistic should come out of all this self-indulgence – I’m referring both to myself and the person buying the art when I say that.
MSF appealed because it’s independent and impartial. 100% of their donations come from private donors. Their simple but essential remit is to provide medical care where the need is greatest. All of this is done without interference or influence from any government.
99 PROBLEMS - How did you come up with this concept/project? Is there more to come? Where have you been and do you wear a disguise…?!
I’ve been casting objects for years. Back around 2000, I attached plaster casts of my left ear to buildings all over London. A handful of those still remain. Then a few years later I dotted the capital with cast plugs in single sockets – again, there is a small number of those that have survived. The ice cream was an idea I’d had years ago but never tried out, probably because it involved me actually sculpting in clay and I lacked the confidence to spend a day doing it. There could well be more to come. Most of the ice creams are around East London. If I told you my disguise it wouldn’t be a disguise would it?! 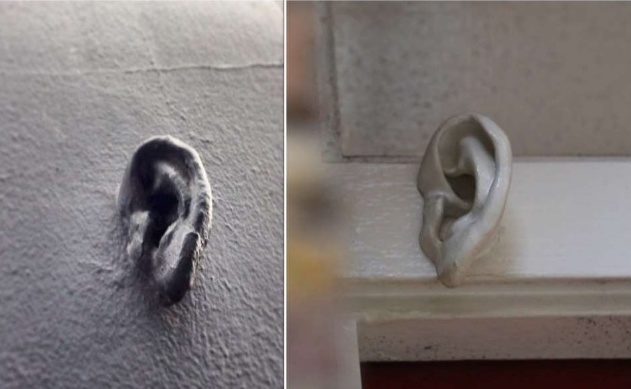 Above: Ears cast in Covent Garden 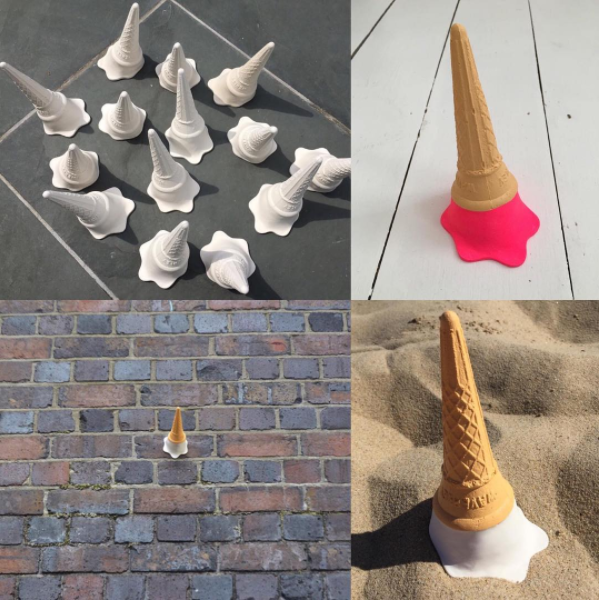 We have read you watch a lot of Adam Curtis documentaries. Would you say he’s an influence on your work? ‘A lot of bad dudes out there’ and ‘The End’ reminded us of his idea of Hypernormalisation.

Yes, Adam Curtis has definitely been an influence. It’s his skill in taking seemingly disparate information and events and weaving them into a convincing narrative that impresses me most. He goes so deep, not just with his thinking, but with the enormous amount of research he does. He must spend weeks trawling through video archives trying to find a pearl of footage to illustrate a specific idea. I very much admire that level of graft and craft.
I may not agree with all of the connections Curtis makes but his approach and attitude resonate with me. I would have liked to have seen the show he did with Massive Attack.
It was finding his documentaries on the internet that led me to thoughtmaybe.com which has to be the greatest resource of educational documentaries freely available. Many of the things I’ve watched on there have changed the way I think. There’s a doc about modern food production titled Our Daily Bread that once you’ve seen should fundamentally alter the way you think about the food you eat. 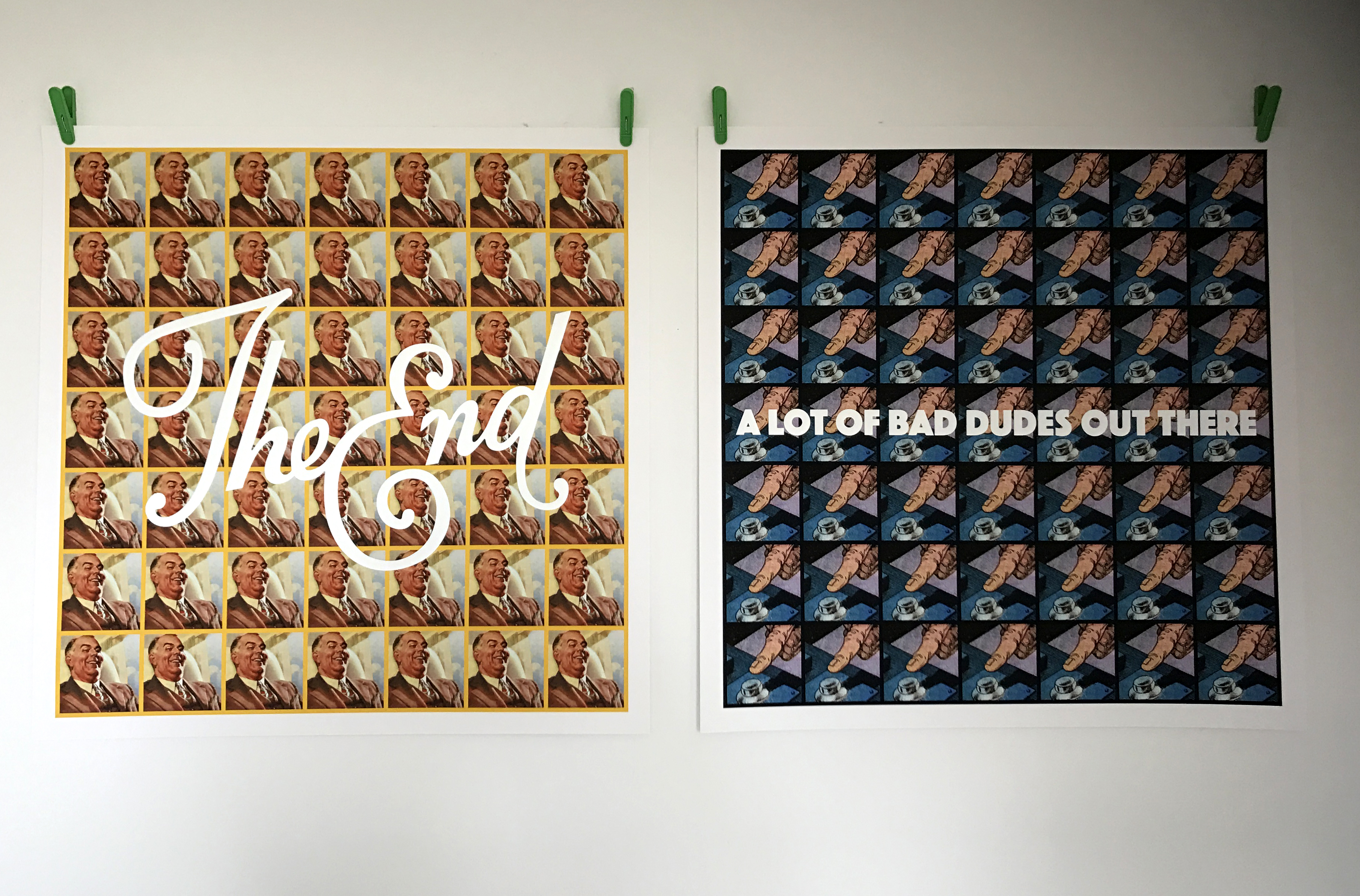 There’s a clear satirical bent to your art. In such intrinsically bizarre times is it easier or harder to find fresh humorous angles?
It’s an interesting question. We are indeed living in bizarre times. A small ray of light in all the darkness is that more people, especially the young, are engaging in political thought. As your audience becomes more sophisticated in their thinking it’s not good enough to just say ‘right-wing bad, left-wing good’. Trump’s an easy, obvious target but to really nail him with a piece of art takes a lot of skill now that there are so many artists and comedians elbow to elbow gunning for him.
I think making art more often than not boils down to two distinct approaches. Do you take a sophisticated idea and make it an obvious way or do you take an obvious idea and make it in a sophisticated way. I’ll leave it up to you to decide what I’m doing in this new show!
We are a fascinating species and we’ve created some amazing things but it is inarguable that the planet would be way better off without us on it. Having said that, it’s not like I’m walking round Sainsburys looking at people and thinking these things…Actually, that’s a lie. Those are precisely the moments when I’m thinking these things!
I do grow more cynical as it feels like we’re living through a time of existential crisis. There’s a strong wave of anti-intellectualism – that whole ‘we’ve had enough of experts’ thing. People are migrating inwards, fearful yet filled with self-importance. The only way to combat this and to create more meaningful actual relationships, as opposed to virtual ones, is to reach out and connect with people – to do stuff for each other without worrying how it will benefit us. This is the reason I’m currently organising a party on the street where I live in London. It’s not something I would naturally do but it feels more important than ever to make these kinds of things happen. 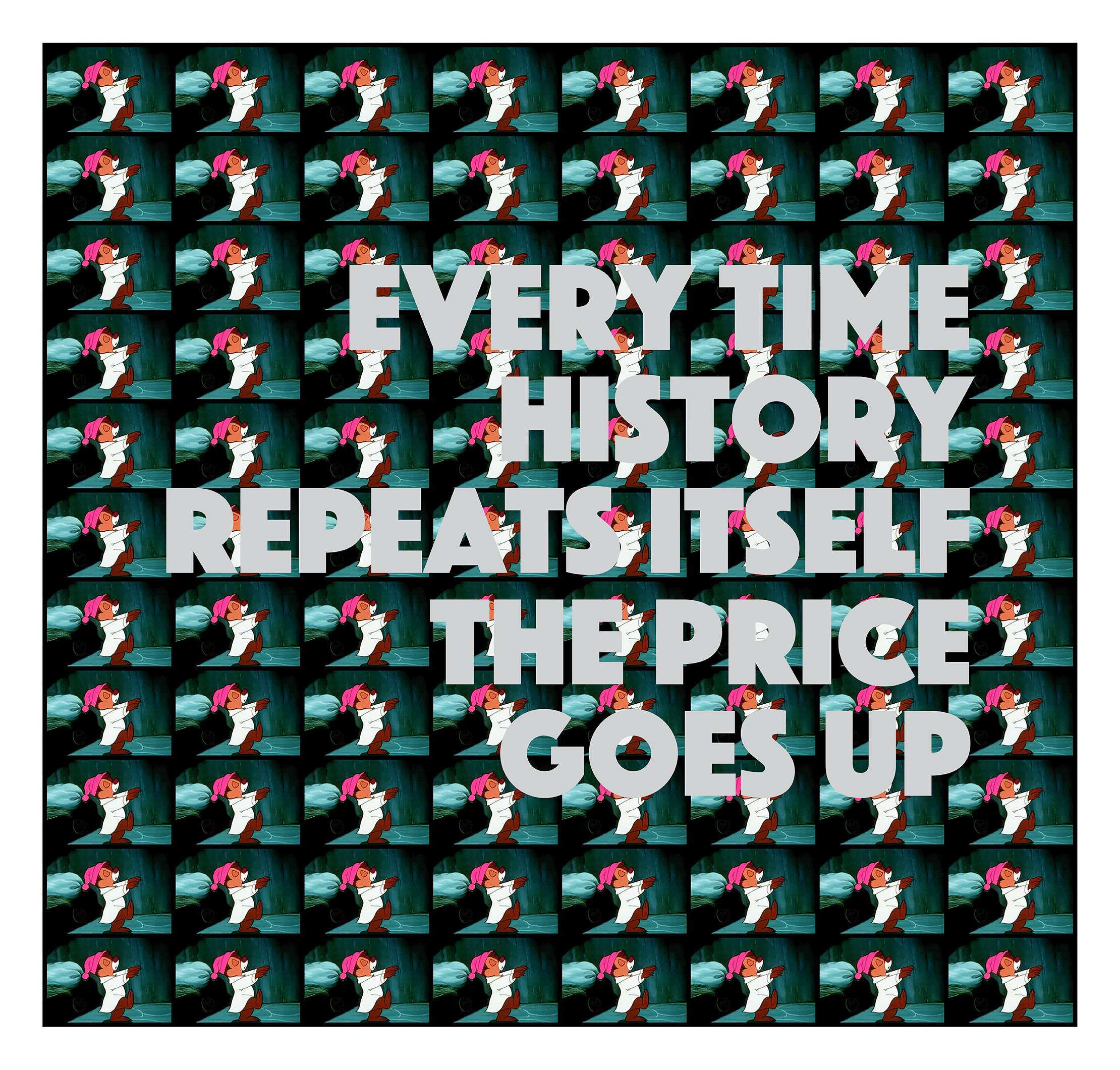 Is the process of working with sculpture and originals creatively similar to working in print or does it feel like a distinct discipline?

It’s totally different. With multiples and originals once you’ve had the idea and made a couple of proofs to make sure it works it just becomes a production line. For example, 99 Problems is a repeated process of casting, drying, masking, painting and packaging. The ME pieces too are similar in their repetitive nature. This is a theme that has been consistent with all of my output for the last 20 years or so. There’s nothing better for me than knowing at the beginning of a day that I’ve got 8 hours or so of production line work. It’s precise and exacting and can be a bit gruelling at times but I can put some music on and become totally absorbed in what I’m doing. I’m lucky to have the opportunity to do it.

And finally, What’s next for Oddly Head?

To wage a never-ending battle for truth, justice and the American way.

Contact info@hanguppictures.com to request your copy of the the pre-sales catalogue