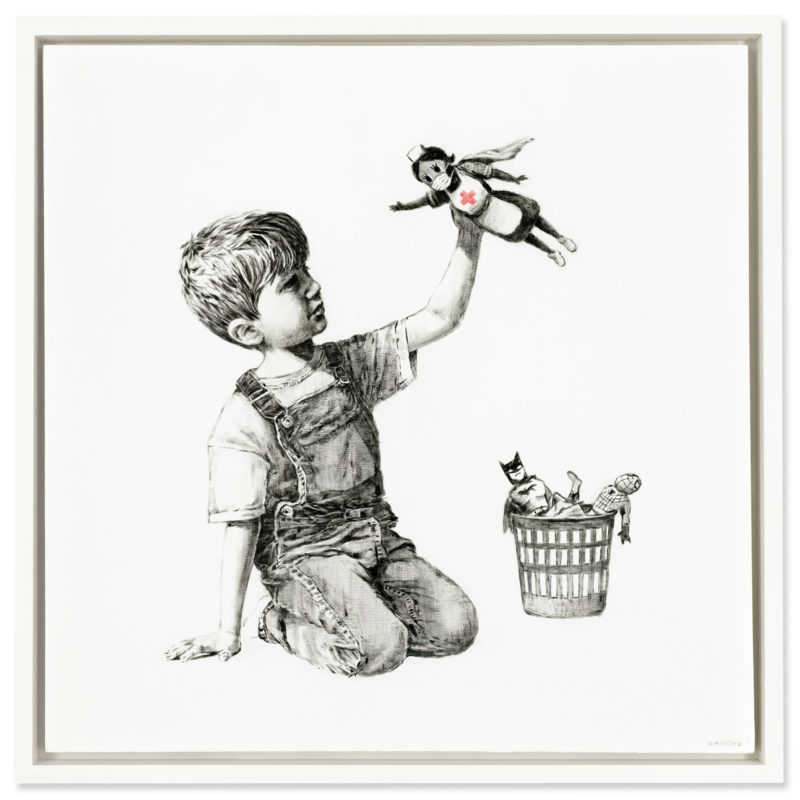 A year after the UK went into its first lockdown, Banksy's painting Game Changer has sold for a record-breaking £16,758,00 at Christie's 20th Century Evening Sale against its £2,500,000 - £3,500,00 estimate. All proceeds from the hammer price will be donated by the artist to "help support health organisations and charities across the UK that enhance the care and treatment provided by the NHS", the Christie's statement reads. The auction house will "donate a significant portion of the Buyer’s Premium to these causes" as well.

Game Changer, a signed oil on canvas, appeared suddenly last May at Southampton Hospital as a thank you, to the staff during the first wave of the Coronavirus pandemic. The piece depicts a child who has discarded his Batman and Spiderman action figures in favour of an NHS nurse. The nurse wears a face mask, cape an apron with her arm is outstretched and pointing forward like that of a superhero flying to their mission. The canvas was accompanied by a note from the anonymous artist, reading: "Thanks for all you’re doing. I hope this brightens the place up a bit, even if it’s only black and white."

"This incredible gift will be invaluable in helping us to focus on promoting and protecting the welfare of our staff as they heal and recover from the last year. As a charitable gift it ensures our staff have a say in how money is spent to benefit them, our patients and our community and is a fantastic way to thank and reward them for the sacrifices they’ve made."

After lengthy battle between two bidders the piece eventually sold over the phone at £16,758,000, setting a new record for Banksy and raising vital funds for our NHS. A reproduction of the original piece will remain on view at the hospital.

The previous record for a Banksy artwork was held by Devolved Parliament which sold for £9,879,500 at Sotheby's Frieze Week Contemporary Art Sale in 2019. At nearly 5 meters wide, Devolved Parliament, is the artist's largest known work on canvas and depicts the House of Commons populated by his signature chimpanzees.

Thank you for reading. Don't hesitate to get in touch with us should you have any questions or would like to request our current Banksy catalogues.