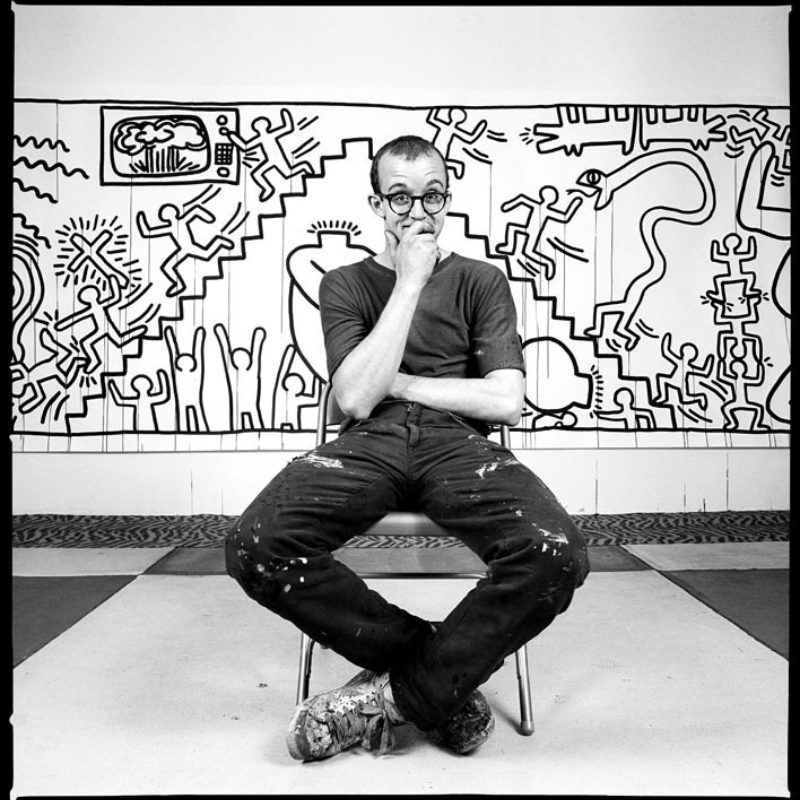 Were You Right? See Below...

Despite this statement, Basquiat has been described by his sisters as a creative child who was constantly painting, making comic books and clay modelling. When he was seven years old, Basquiat was hit by a car, and his mother gave him a copy of the medical textbook Grey’s Anatomy to help him pass the time in hospital. The book would go on to provide inspiration for many of his adult works.

In June 2020, Banksy posted a tribute to the Black Lives Matter movement on his Instagram page in the wake of George Floyd’s death. This caption accompanied a quasi-religious image of a shrine, featuring a portrait, flowers, and a burning candle setting light to the US flag.

The artist wrote this diary entry during the height of the 1980s HIV crisis and was himself diagnosed with Aids in 1987. The knowledge of his illness prompted a period of relentless output, and also resulted in Haring using his platform to become an AIDS activist.

In a November 2020 conversation with Kenny Schachter, Emin described the shocking comments she received from trolls when she created an online lockdown diary for White Cube. The vitriol was so intense that moderators took down some of the messages. However, this honest, pretension-free conversation reveals Emin to be refreshingly down to earth, fascinating and ego-free.

I Loved My Innocence by Tracey Emin, lithograph on paper, 2019. Available now.

Talking in Interview Magazine in 2013, Hockney discussed his firm belief that art and technology go together and always have. The artist went on to discuss his controversial theory that 14th-century European artists had been the first to use optical devices (including concave mirrors, lenses and camera obscura)to project pictures onto surfaces, allowing them to create more realistic paintings.

During a discussion with the website GetMe!, Creed explained that he didn’t think he was particularly amusing. In other interviews, he has batted away the idea that he is funny, instead underlining his seriousness and his ambition. Speaking to Prospect Magazine, Creed admitted he was shocked to realise how desperate he was to win the 2001 Turner Prize following his nomination (and he did win).

Talking to Art Flyer about the transformative journey towards creating his giant thumbs up for Trafalgar Square’s Fourth Plinth, Shrigley went on to explain that the piece (entitled Really Good) was an ‘endorsement of everything’ and that the idea that people would project their own meaning onto it was exciting. The press went on to do just that, with The Guardian viewing the work as ‘a sly parody of the emptiness of public art’, The Mail describing a ‘phallic thumb’, and The Telegraph going with “an inscrutable smirk of a sculpture that can be made to mean whatever you want it to mean.”

Half the Air In A Given Space by Martin Creed.

Despite being a key figure in the 1980s East Village art movement, Futura isn’t precious about his career and had this to say in a 2001 New York Times article. His varied jobs have included time in the military and even a stint as a postman, when work dried up after the initial boom and he found himself with a family to support. In the 20 years since this article was written, the public attitude to graffiti art has changed and Futura’s subway work is viewed with great respect. In October 2020, he opened his first solo show in New York for 30 years, at the Eric Firestone Gallery.

Speaking in a 2013 interview with Harpers & Queen magazine, Murakami professed his love for the American restaurant chain In-N-Out. His penchant for burgers is much documented and the artist even created his own versions for his now-closed cafe, Bar Zingaro, in Tokyo. Featuring his signature flower embossed on the top alongside a wagyu beef patty, the sandwiches received rave reviews.

In a 2003 interview with The Guardian newspaper, Perry was asked why he dressed as a woman and came up with this answer. Toxic masculinity has been a preoccupation for the artist since the inception of his career: in 2016, he wrote The Descent of Man which explored the role of traditional male values in destroying lives.