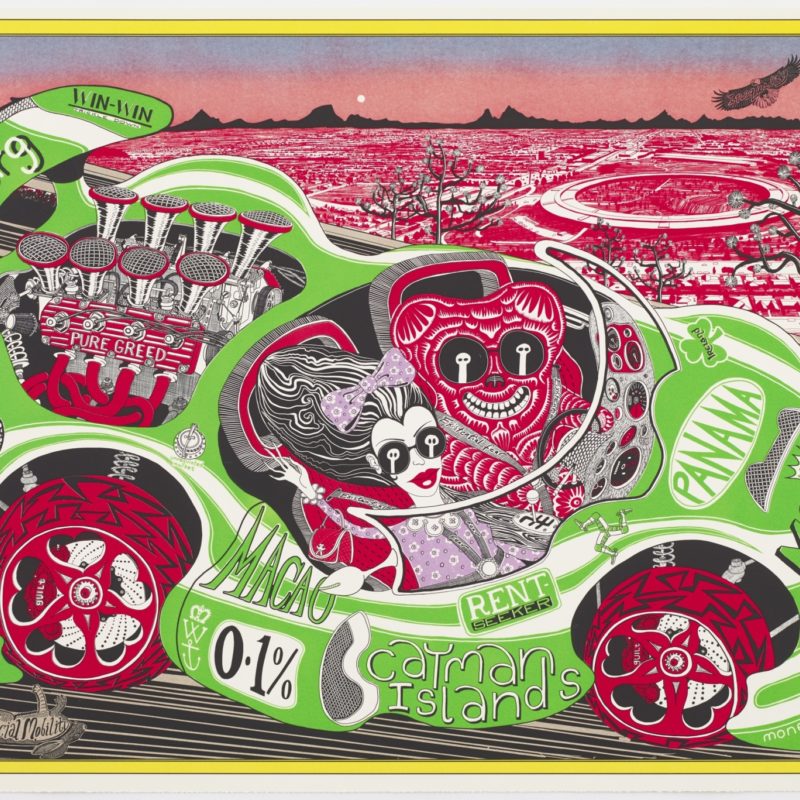 Though galleries and museums remain shut in many parts of the world, art is playing a crucial part in the conversation around important political and societal issues, from Black Lives Matter to the Climate Crisis.

After what some saw as a period of inertia in the 1990s and early 2000s, art has found its voice again, with many artists using their profiles to change narratives around causes close to them. From Banksy’s migrant rescue boat to Olafur Eliasson’s 2018 meditation on the climate crisis at the Tate Modern, art has become a force for change once more – urging us to think about how we can reshape the future of the planet, and ourselves.

The Loise Michel on a refugee rescue mission, financed by Banksy. Photographed by Chris Grodototzki.

Of course, art that makes a political statement isn’t a new idea, as anyone who’s seen Goya’s harrowing series of etchings The Disasters of War will testify. Back in the early 19th-century, the Spanish court painter created the prints as a response to the ravages of a long-fought war of independence (although the etchings were only published posthumously, possibly to avoid censorship). Depicting rape, famine, executions and mutilated corpses, the works remain a shocking indictment of the futility of war, and have gone on to influence everyone from Picasso to the war photographer Don McCullin.

Goya’s disillusionment was particularly interesting because it questioned the choices of his wealthy patrons. It’s an uncomfortable truth that the traditional patron/artist relationship – stretching from the Medicis of the Renaissance to today’s movie and music stars – usually affords the sponsor some influence over an artist’s subject matter. It also reinforces the notion that art is elitist, raising the value of an artist’s work while cementing the status of the collector. Grayson Perry explored this in his 2019 exhibition Super Rich Interior Decoration at Victoria Miro, which focused on the way that the wealthy assert their identity through their purchases (exhibits included a table lamp entitled Money On Holiday, which featured the names of tax havens alongside Martin Parr photographs of couples on yachts, jewelled hands and women carrying designer bags).

Money on Holiday by Grayson Perry, 2019

Perry’s exhibition subverted its genre and made a point, up to a point (in an article he wrote for the FT, he quoted digital artist Nam June Paik, who said “an artist’s job is to bite the hand that feeds him, but not too hard”). However, other artists have been able to shun the traditional dynamic to a certain extent, utilising public commissions or sponsorship to create pieces with a wide reach and a strong message.

The 1980s New York art scene, which spawned Basquiat, Haring and Futura 2000 among others, was instrumental in creating a wider audience for socio-political art, because it brought work out of traditional galleries and into more egalitarian settings, a legacy that paved the way for Banksy’s politically-charged street work. In Haring’s case, making public art was a conscious decision through which he hoped to “communicate and contribute to culture and, eventually, history.” His public murals – from a human chain of unity on the Berlin Wall to New York’s Crack Is Whack anti-drugs message – reached huge, worldwide audiences.

Parisian artist JR has gone one step further, using the architecture of neglected communities as part of his ambitious works conveying themes of social exclusion. For his first large-scale project Portrait of a Generation, he pasted photographs of the residents of a notorious Parisian housing estate around both the estate and more wealthy neighbourhoods in the wake of the Paris riots. In each photo, the subjects pulled quasi-frightening faces to mimic the characters that they had been cast in by the government and press, simultaneously humanising the estate. JR has since travelled to Rio’s oldest favela, the West Bank barrier and conflict-ridden Sierra Leone.

Despite his visible support of issues close to his heart, JR does not identify as an activist. As he put it in his 2011 Ted Talk, “art is not supposed to change the world… but to change perceptions.” In a 2014 New York Times article, JR praised the American artist Swoon because she “always managed to have some social impact with her work and at the same time stay an artist, not an activist.” (Swoon had just opened her Brooklyn Museum exhibition Submerged Motherlands, a multi-faceted installation inspired by Hurricane Sandy and the climate crisis). JR compared her to Ai Weiwei, whose notable political artworks include 2017’s Good Fences Make Good Neighbours, a series of installations across New York inspired by the migrant crisis.

Changing perceptions has also been a strong theme in recent work by African-American artists, who are rewriting unhelpful narratives on race. Mixed-media artist Derrick Adams often depicts his subjects engaged in everyday pursuits such as lazing in the swimming pool, celebrating the pleasingly mundane aspects of life as a black person that have historically been missing from American visual storytelling. Kehinde Wiley has also successfully challenged negative perceptions of black men by placing them in poses taken from the Old Masters. In doing so, he questions white dominance both in history and on gallery walls. Wiley recently founded Black Rock Senegal, an artist’s residency programme that seeks to change global discourse about Africa, which makes him something of an activist too (though he has shown neither a JR-like aversion to the label or a clear preference for it).

For politically-motivated duo kennardphillipps though, art and activism are inseparable – they see their work as “the visual arm of protest” and have drawn on advancing technologies to convey powerful messages to large audiences outside gallery settings. In the case of the iconic Photo Op (a digital montage which depicts a grinning Tony Blair taking a selfie in front of a huge explosion), this meant projecting a giant version of the image onto Westminster’s Central Hall just before the politician was due to give evidence to the Iraq Inquiry in the building opposite. Photo Op was subsequently effectively censored, when hoardings firms refused to display it as an advertising poster for an Imperial War Museum exhibition.

Coronavirus, which has hindered protests and rallies, has presented more opportunities for artists to get their points across to an audience that is, for the most part, stuck at home and increasingly frustrated. Magda Archer’s recent poster-bombing campaign across various UK sites focused on Brexit and the UK government’s handling of the pandemic. Across the pond, American artist Susan Stilton’s Mayday Mayday Mayday encouraged people to mail names of the coronavirus dead to then-President Trump. Both projects illustrate that when you live in turbulent times, art provides both a balm and a powerful way to tap into public feeling without violence or repercussion.

Magda Archer, Is It Over Yet, 2021. Photographed by Kevin Lake