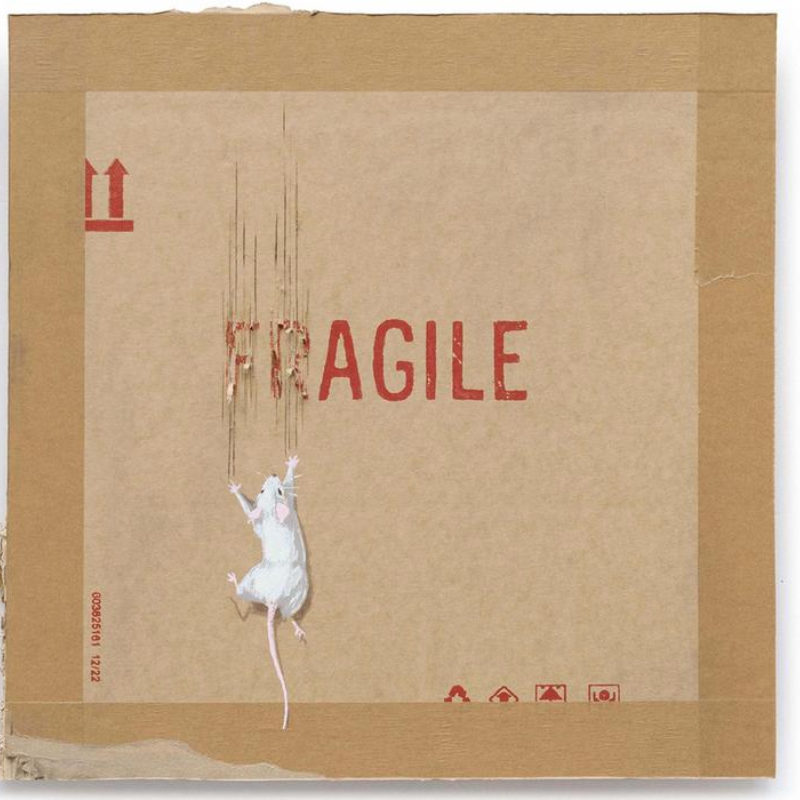 The charity, Legacy of War Foundation reports 3,500 rogue registrations for the new Banksy limited edition screen print in a statement from January 10th made on their website.

Banksy previously made headlines in November when he confirmed that the seven murals seen around Ukraine were part of his effort to show support for the war-torn country. Continuing with this commitment, the artist announced the release of 50 new unique screen prints in a fundraising effort. Covering the cost of production, all the proceeds from the sale will go directly to “our friends in Ukraine”.

Working with the Legacy of War Foundation, Banksy made the charity auction project known via his Instagram account on December 9th 2022. The new artwork showcases a cardboard box with the image of a white rat scratching the face of the box as it slips down the front, it features the word 'FRAGILE' (which of course gives the screen print its name).

As swathes of fans and collectors rushed online to register for the print, the charity website experienced some unforeseen issues with the overwhelming number of requests. “We are currently sifting through the registered entries and will notify successful applicants shortly. Thank you for your support. The site received over one million requests (and 3,500 hostile attacks from Russian IP addresses), so we would appreciate your patience at this time,” reads a website statement from January 10th.

Banksy explains in a statement: "In Ukraine, I saw a Legacy of War team sweep in and provide medical attention, heaters, fresh water and a friendly face to some very desperate people in a bombed-out building. They also lent me one of their ambulances to work from, which turned out to be extremely useful when an angry babushka found me painting on her building and called the police.” According to ITV News, the funds raised will be used to purchase new ambulances and support vehicles while also providing heating for struggling communities facing a harsh and difficult winter.

Each FRAGILE print is signed and numbered from an edition of 50, and is limited to one per customer at the cost of £5000 (plus applicable taxes). All are unique within the edition, with Banksy taking a 'sharpened pizza-cutter' to each piece to create the scratched effect.

Read more about Banksy's work in Ukraine below.