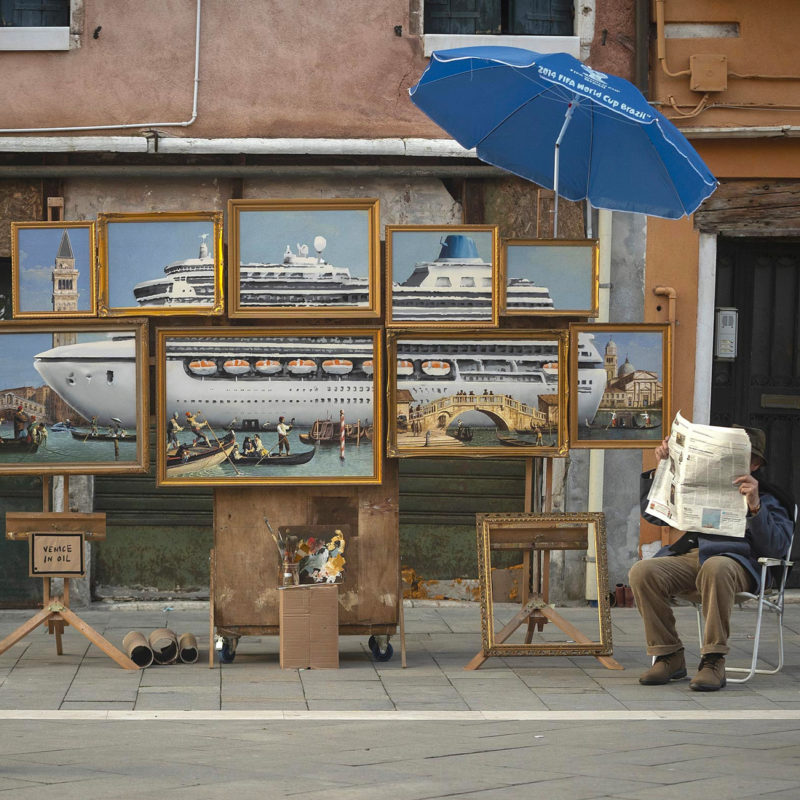 Setting out my stall at the Venice Biennale. Despite being the largest and most prestigious event in the world, for some reason I’ve never been invited.

Banksy took to Instagram last week to share his newest stunt with his 6 million followers, posting a short video of a concealed man setting up a stall of framed oil paintings at St. Mark's Square. When assembled, it becomes clear the paintings are fractions of a larger image, that of a massive cruise ship loitering in Venice's Grand Canal. The unauthorised display then catches the attention of the police, who, without second thought, instructs the vendor to take his work down and leave. Watch below:

Titled 'Venice In Oil' the display comments on the controversial cruise ships that pass the Grand Canal daily. The depiction of the massive cruise ship towering over the ancient city-scape and its traditional gondoliers combined with the artwork's title make a clear statement on the effect and pollution that these cruise ships cause to the city.

Banksy's mural on a canal wall, first spotted earlier in May

When the Venice Biennale opened to the public, many speculated that a stencil mural on a canal wall, depicting a migrant child holding up an S.O.S. flare, was a Banksy. The anonymous artist who usually verifies his work by sharing it on his Instagram and website, finally shared the piece two days after 'Venice In Oil' was posted, finally confirming its authenticity. The image seems to be a comment on the global refugee crisis, a topic the artist has addressed in his work multiple times. Was it also a little trick the artist played to divert attention away from his latest and more spectacular stunt?

To browse works by Banksy click here. For press enquiries and additional comments please get in touch with ben@hanguppictures.com or call the gallery on 0203 667 4550. As always thank you for reading.