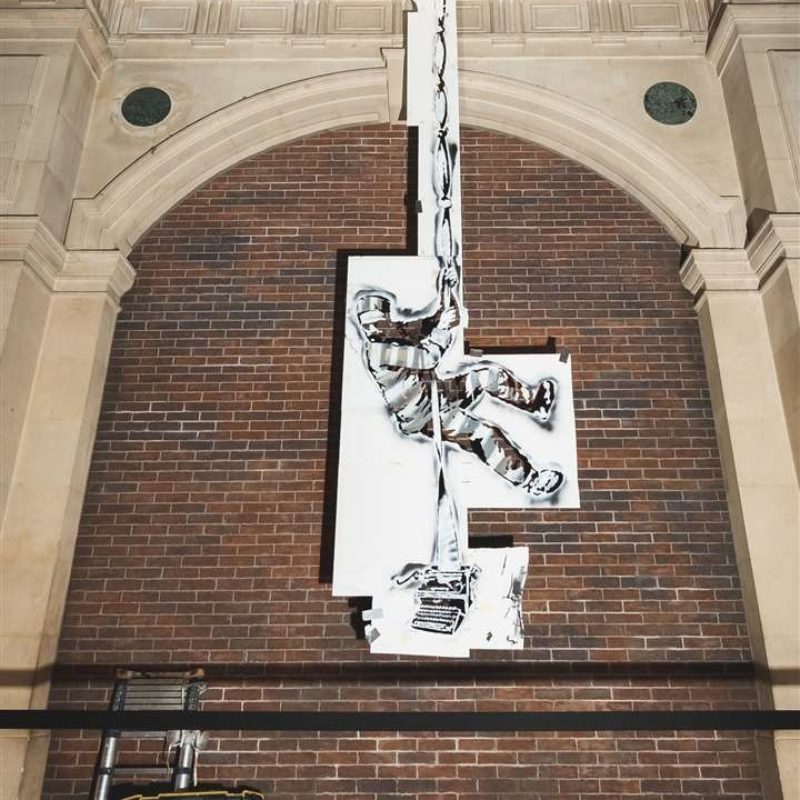 Banksy has officially pledged to raise £10,000,000 to help buy the prison formerly known as Reading Gaol in order to turn it into an arts centre. The vacant prison will otherwise be sold to property developers who plan to transform it into an apartments complex. The elusive street artist has offered to match the purchase price by selling the stencil used to paint Create Escape on the building's facade back in March.

"Oscar Wilde is the patron saint of smashing two contrasting ideas together to create magic. Converting the place that destroyed him into a refuge for art feels so perfect we have to do it."

- Banksy, in a statement published by the BBC

The prison was closed down in 2013 and put up for sale in 2019. However, a deal to sell the building to developers fell through last year and Reading council has since hoped to turn it into an arts centre. Hollywood actors Sir Kenneth Branagh, Natalie Dormer and Dame Judi Dench have lent their support to the campaign.

The stencil Banksy used to make the mural, Create Escape, is currently on view at Grayson Perry’s Art Club exhibition at Bristol Museum & Art Gallery. Banksy is believed to have sold a stencil of his only once before, making these works extremely rare.

The stencil used by Banksy to make 'Create Escape' on display at the Art Club exhibition.

"We very much welcome the attention that Banksy’s interest in Reading Gaol has placed on both the MoJ’s [Ministry of Justice] sale of the vacant prison and on the council’s ambition to transform it into an hub of arts, heritage, and culture."

The mural, depicting a prisoner believed to be Oscar Wilde, escaping using a rope made of bedsheets and tied to a typewriter appeared on the wall of Reading Prison in March. Banksy claimed the piece as his own through a video posted to his website and Instagram. The short clip captioned Create Escape took viewers behind the scenes of the work's creation. It was narrated by the legendary Bob Ross. Watch below:

Banksy has finally confirmed he is behind a new mural that has appeared on a former prison wall in Reading.