Grayson Perry and ‘national treasure’ are often mentioned in the same breath – yet the artist is an unlikely emblem of British identity. Questioning national characteristics – from working class machismo to virtue signalling, via the habits of the super rich – he often attracts criticism. Still, he remains enduringly popular, a lovable eccentric who sums up all that’s good about Britain’s open-minded attitudes at a time when the country is coming under increasing scrutiny. Below, we’ve highlighted eight reasons why he deserves his national treasure status.

Art is often the preserve of the privileged, but Perry grew up in a working class Essex home, something that’s provided plenty of inspiration for his art (witness A House for Essex, a quasi-temple built in Wrabness in 2017 and dedicated to the life of fictional Essex woman, Julie Cope). After his ‘toxic’ mother and ‘violent’ stepfather threw him out of the house, Perry got himself through university and pottery classes, honing his craft for 20 years before winning the Turner Prize in 2002. Perry has since supported charities working with homeless youth: in 2020, he designed a skateboard in collaboration with Vans, auctioning it off to raise money for London charity Centrepoint.

A House for Essex, a project by Grayson Perry and FAT Architecture

He cross-dressed before it was the done thing

These days you can wear whatever you want. But back in the 1960s, Perry’s transvestism was abhorrent to his mother and stepfather (and allegedly the reason they made him homeless). Accepting the Turner Prize dressed as alter-ego Claire on the world stage signalled acceptance on a global scale for the artist.

Grayson Perry in AnOther Magazine A/W11

He and his wife are relationship goals

Married to the therapist Philippa Perry for 30 years, the artist has a thoroughly modern relationship that sees her featuring on his TV show, doing joint interviews and appearing in his work. He’s on record saying that they never row, and she’s revealed their tips for avoiding conflict (not focusing on right and wrong but instead on feelings). Married bliss indeed.

While other artists build their brands through being reclusive (like Yayoi Kusama) or hell-raising (like Damien Hirst), Perry has made art populist through Channel 4’s Grayson’s Art Club, the surprise hit of lockdown. More than one million people regularly tuned in to the series, which urged everyone to have a go and then celebrated their efforts in the very definition of a joyful distraction. An exhibition of art produced for the second series (delayed by Covid), is on at the Bristol Museum & Art Gallery until September 2022.

After curating the 250th Royal Academy Summer Exhibition, Perry told the Evening Standard that one critic had sneeringly accused him of mere interior decoration.”My response was: yes,” said Perry. “Get with the programme. It’s what we all do, isn’t it?” The conversation informed one of his own exhibitions at Victoria Miro Gallery, 2019’s Super Rich Interior Decoration.

He champions other artists

Perry name checks some of the UK’s other foremost social commentators as his favourite artists – David Shrigley, Martin Parr etc. But he’s not snobby in his taste, choosing pieces because he likes them rather than because of who created them. Thus, the walls of his home are filled with an eclectic mix of bits from his travels, prisoner art and pieces he’s bought his wife. “I’m going to have one room in the house that’s just got portraits of me in it,” he told The Standard. “Because a lot of people give me portraits of myself, good and bad.”

He made ceramics fashionable

Back in 2002, when Perry’s vases scooped him the Turner Prize, nobody was working with clay. “The art world had a blind spot around craft,” he once said. “Pots – that was like dragging something in from the suburbs.” So much more complex than the naysayers would have us believe, Perry’s practice is informed by the vast history and tradition of his most famous medium, which traces back to Ancient Greece. His work is a reminder of the importance of ceramics in the shaping of cultures and narratives over millennia. 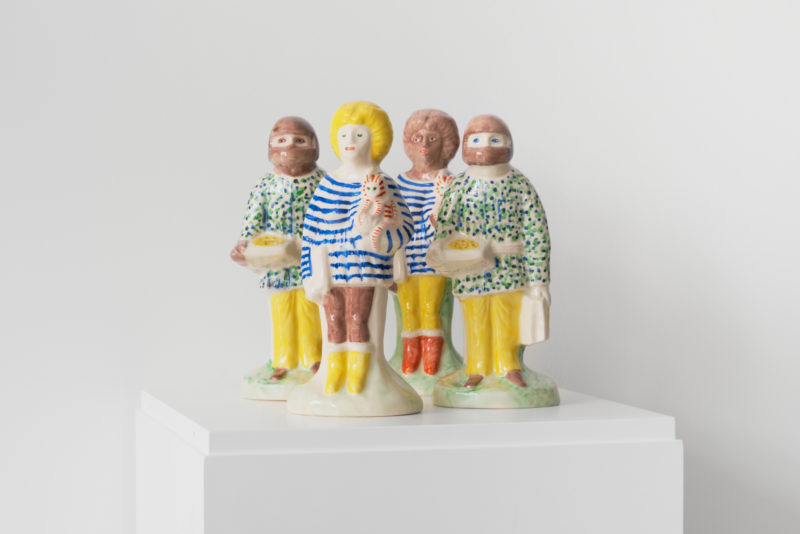 His best friend is a teddy

With him through the good times and the bad (notably through a childhood illness that gave him his name), the lovable Alan Measles is so precious to Perry that he’s achieved God-like status in his pieces – a repeated, totemic symbol of comfort and hope. Loving something to cuddle in times of need? We can all relate to that.

Grayson Perry’s on his pink motorbike carrying his teddybear and childhood hero, Alan Measles, in a glass shrine on the back.

See the pieces we have available from Grayson Perry here. To chat about his work in further detail, please contact us. 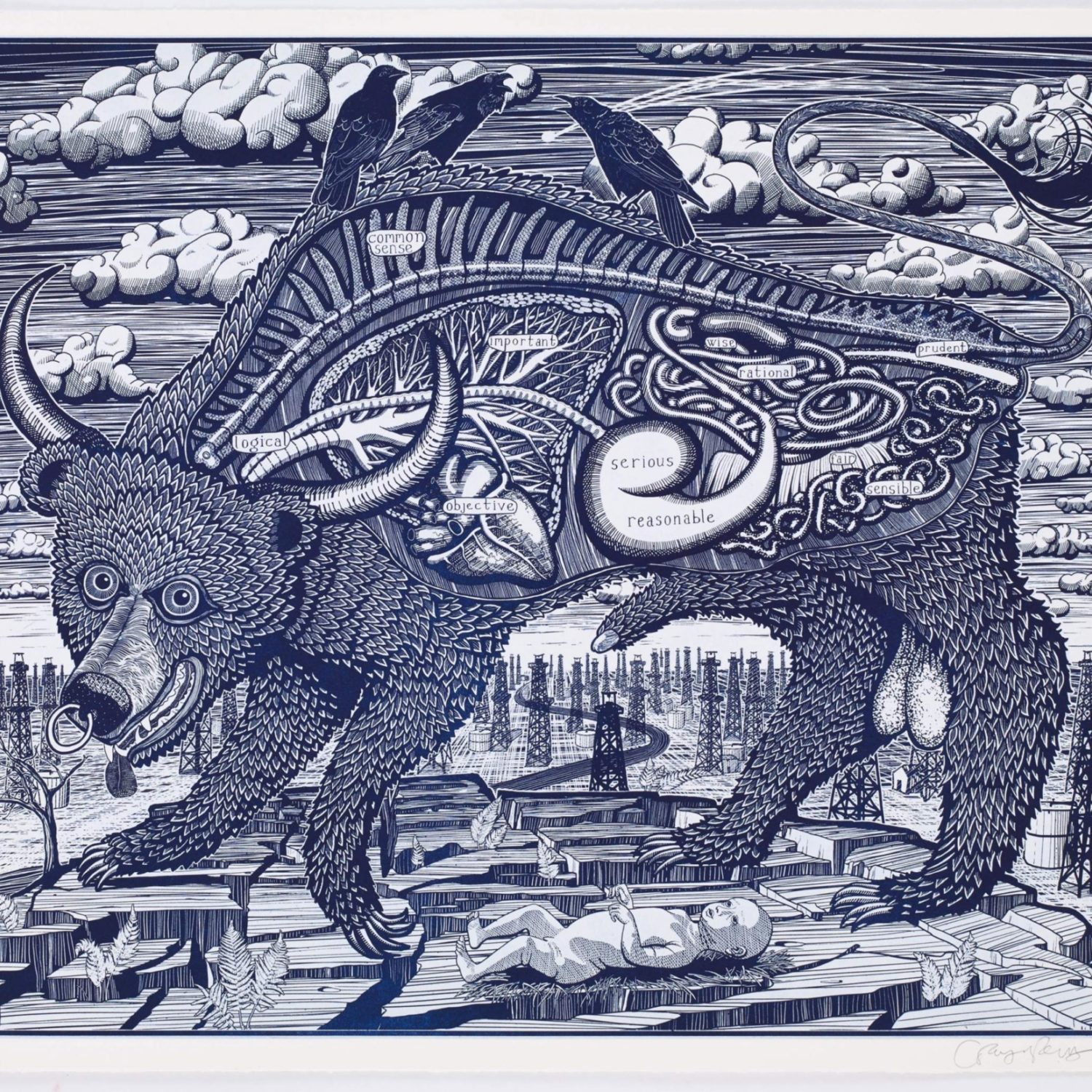 Be the first to know about new Grayson Perry Works and Viewing Rooms. 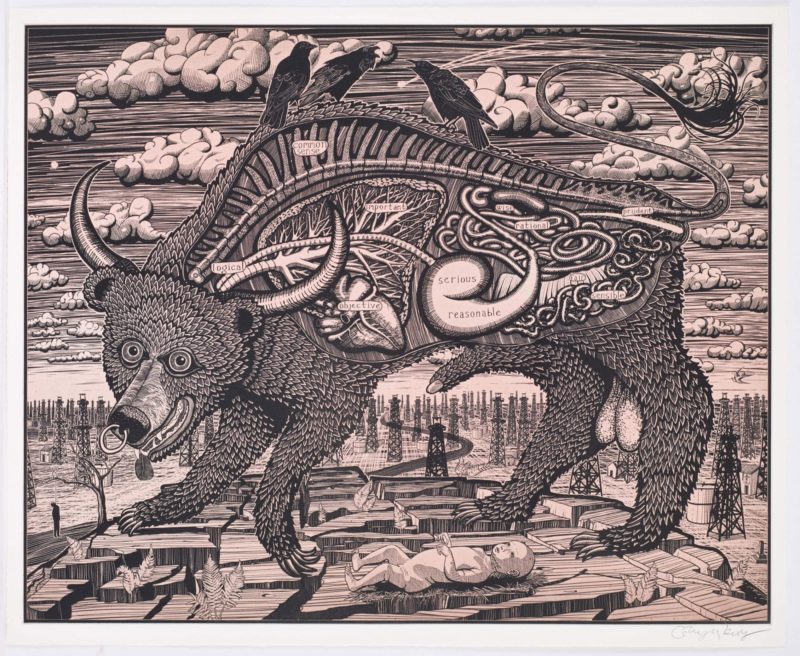 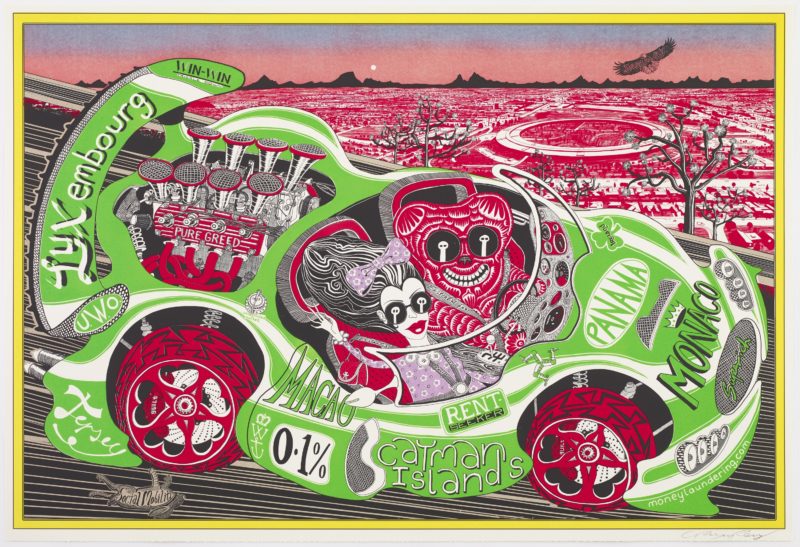 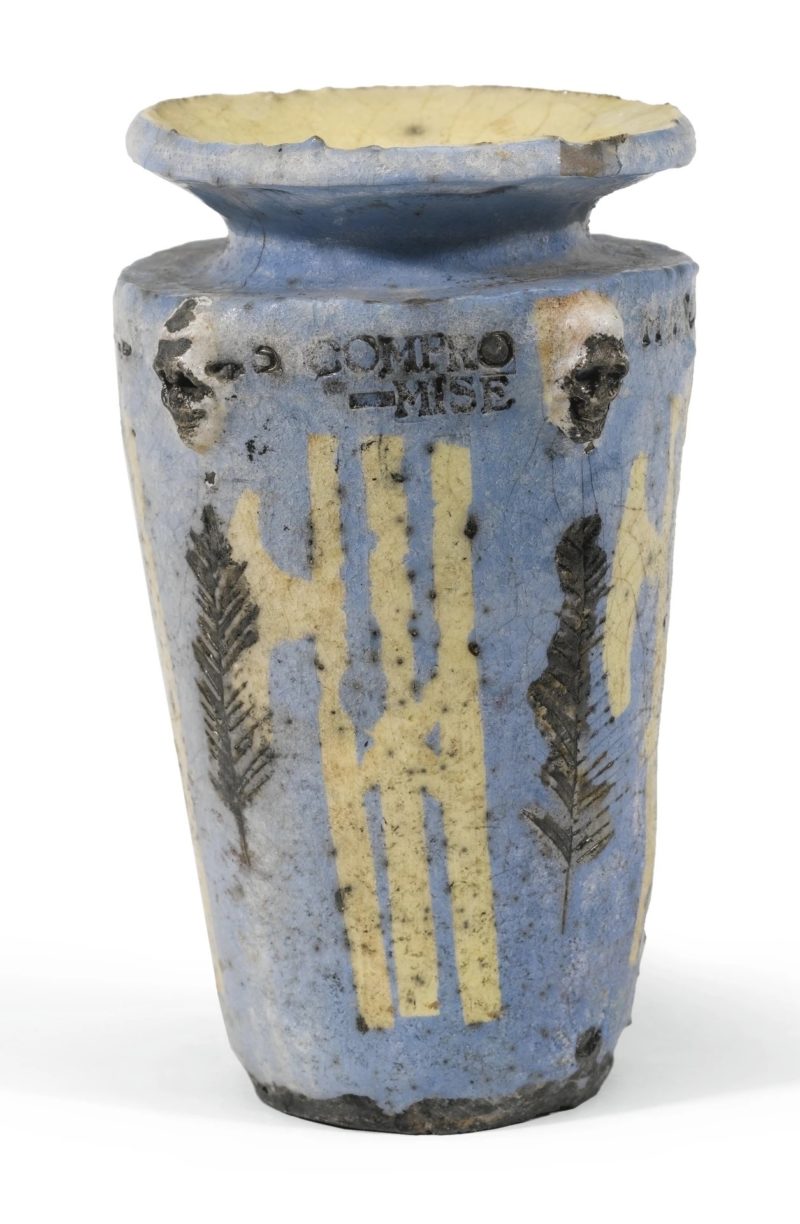 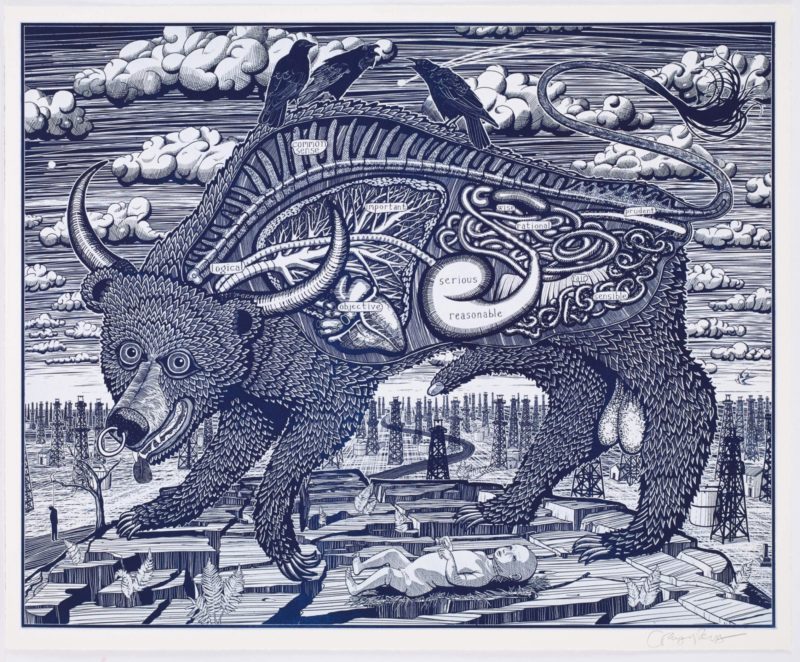 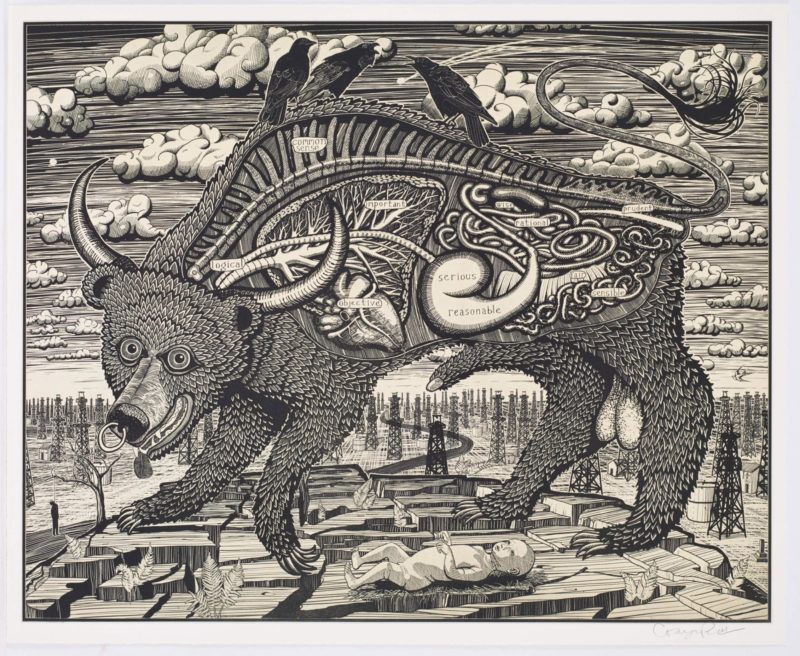 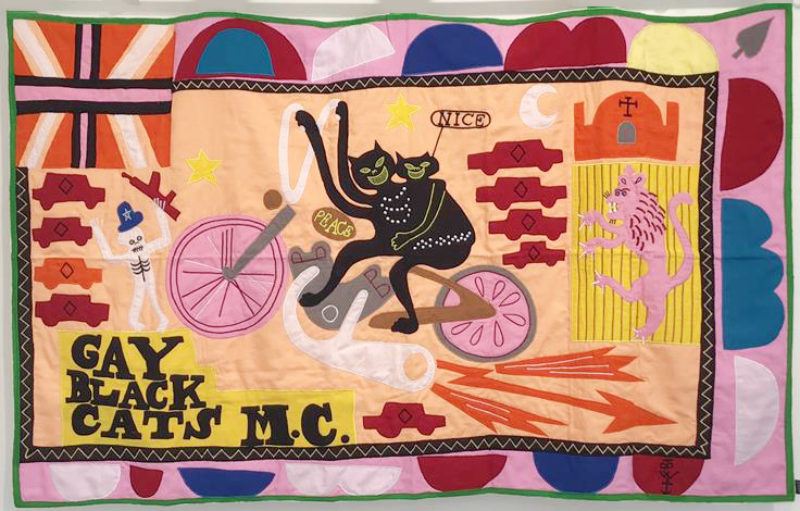 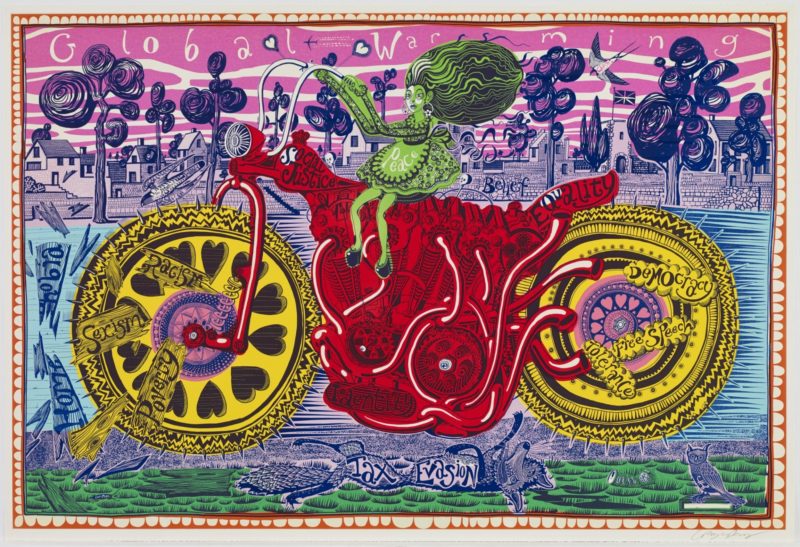 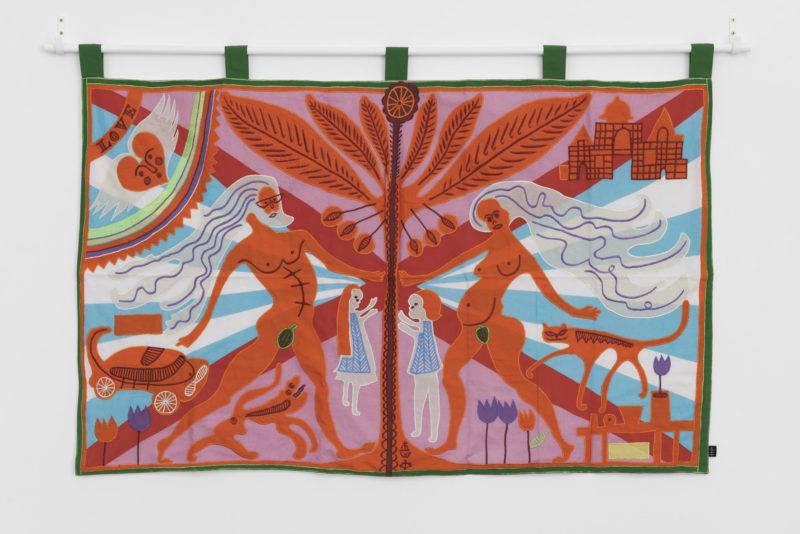 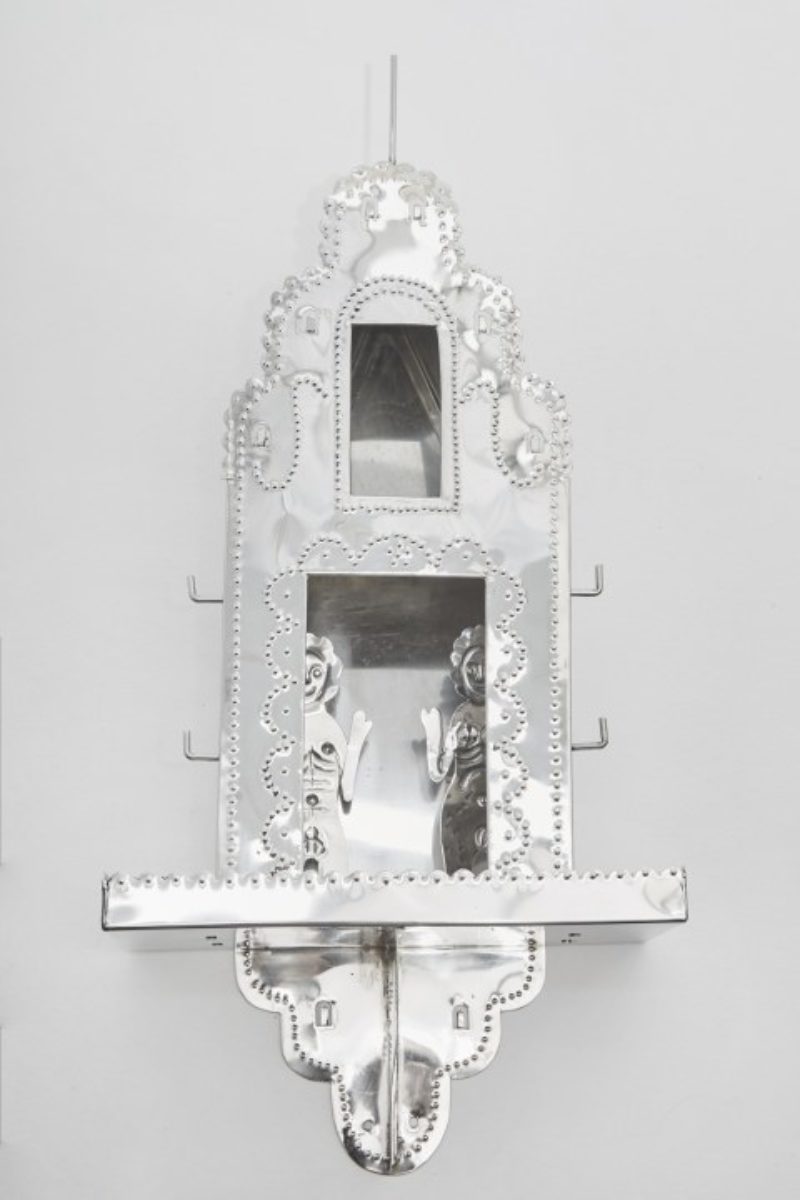