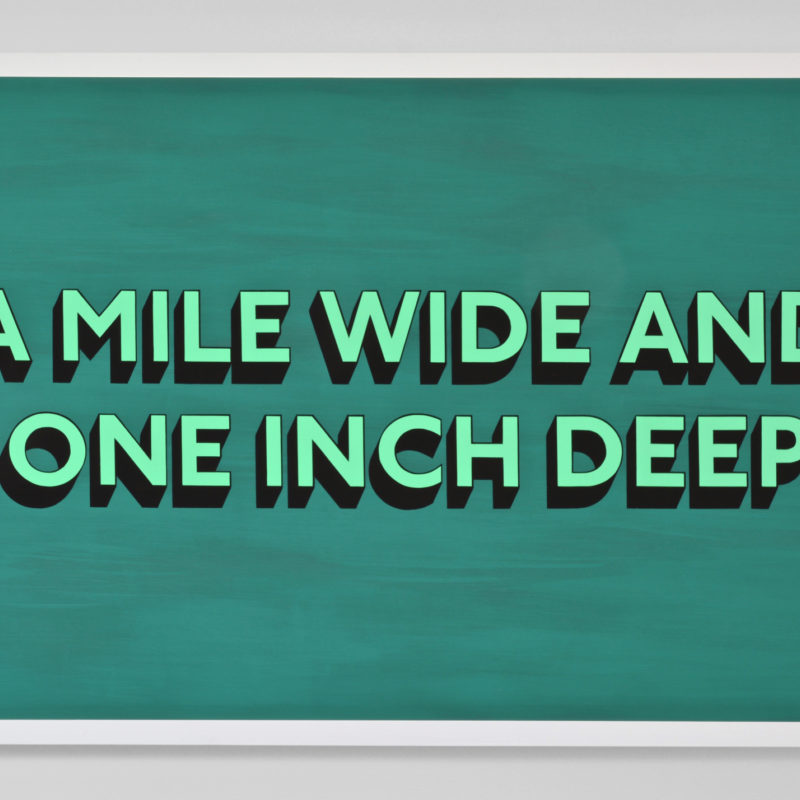 Oddly Head is the artist to watch. Following on from his sell-out ATTN SPN series earlier this year as well as a successful inaugural solo show last year, we are proud to exclusively release his brand new collection of hand-painted originals entitled A MILE WIDE. These bold slogans are quickly taking shelter in collections worldwide.

Mike Snelle from The Connor Brothers is following the artist closely. He says, "Oddly Head is the first artist I've seen for a long time that I'd not heard of before but want to collect. He has that rare combination of having something to say and a unique way of saying it."

Above: Oddly Head, ALL NECESSITIES

This is a great body of work which follows on from his ATTN SPN series. Tim Fishlock, aka Oddly Head, confronts and questions the vulnerable, self absorbed traits which are characteristic of many in contemporary society as a result of the internet. He highlights this danger of technology throughout his artwork. Much of Oddly Head's work is a reaction to the overwhelming proliferation of images the internet continuously presents to us. He attempts to come to terms with this new way of being in an age of instant gratification and unfettered choice.

"This new collection of paintings titled A MILE WIDE, returns to the themes of the ATTN SPN series.

Our brains are exposed to a relentless barrage of digital information, much of it without depth or significance. Swiping and clicking through the day, we're rewarded with likes, follows and all manner of click-bait that feeds our needs. These rewards are what the code-writers at Facebook describe as 'tiny wins'. They keep us coming back for more. And there's always more. Limitless quantity that's sparse on quality.

When our boredom is amused we don't have to be alone with our thoughts. We don't have to think about the future. We are distracted and anesthetized. THE HAPPIEST PLACE IN THE WORLD WHEN THERE IS NO TOMORROW is appropriately enough, a conflation of two advertising slogans for Disney and FedEx."

"This short termism is vividly reflected in the political ideologies of our time. We get no reassurance from the government. Parties on all sides are short-changing us by not thinking beyond the next couple of years. Has our society post Industrial Revolution ever witnessed such a death in strategic thinking by our supposed masters?

It's little wonder that anti-intellectualism gains traction when our politicians are intellectually impoverished. Whilst many of us worry about the potential for a second Cold War, our Secretary of Defence tells the whole of Russia to 'go away and shut up'.

Doctors in South Korea - one of the most digitally connected nations in the world - have identified a condition among young people whose reliance upon electronic devices has rendered them incapable of remembering everyday details such as their own phone number. They call it digital dementia. Perhaps this won't be a problem in the future. Perhaps technology will come good on its inherent promise to unshackle us from work and responsibility and we'll have no need to remember anything much at all."

"A BILLION BALCONIES FACING THE SUN is a quote from JG Ballard where he envisages a leisure-dominated society. Artificial Intelligence takes the strain while people retire from work in their thirties, looking forward to fifty years in the sun. It's a phrase that makes me think of the train-length stretch limo in Chris Cunningham's video for Windowlicker, but in this case it would be a five-mile long cruise ship with row upon row upon row of individual balconies filled with tubby humans, all sated from the 500 metre-long all-you-can-eat buffet on the 23rd deck."

Above: Oddly Head, SOMETHING WHATEVER

So click HERE to head over to Oddly Head's Catalogue and check out his new originals. We hope you enjoy them as much as we do!

Any questions or queries simply contact us on info@hangupgallery.com or give the gallery a call on 020 3667 4550.