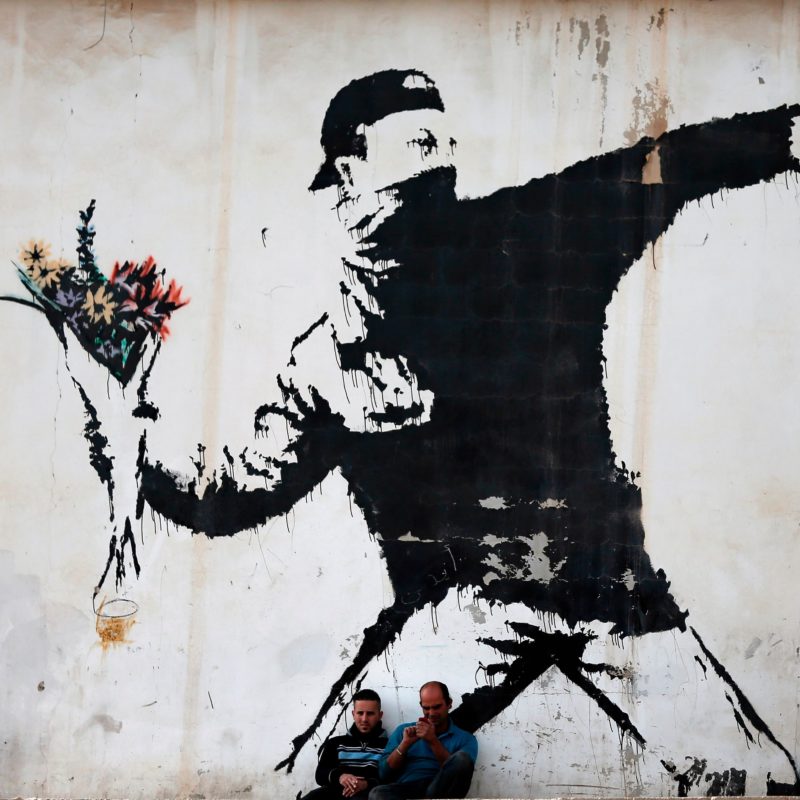 7 Things You Should Know About Banksy | The UK's Favourite Artist

In a new poll conducted by YourGov, Banksy has been crowned Britain's favourite painter of all time. Certainly not a small tittle. The artist won Britain's heart over greats such as Da Vinci or Van Gogh. In light of this new honour for the anonymous artists we've gathered some interesting facts and trivia you should know about the nation's favourite artist.

"Nobody ever listened to me until they didn't know who I was."

Here's 7 Things You Should Know About Banksy

The highest price ever achieved at auction for a Banksy artwork is £18,582,000 for the now iconic Love Is In The Bin at Sotheby's Evening Sale in October 2021. Almost three years after Girl With A Balloon was shredded at a Sotheby’s Evening Sale – becoming Love Is In The Bin in the process, the artwork sold for more than three times its high estimate. The artist's previous auction record was held by Devolved Parliament which achieved £9,879,500 at Sotheby's Frieze Week Contemporary Art Sale, in 2019. The result also set a new world record for Street Art at the time.

Love Is In the Bin was the first artwork to be created live at auction in 2018.

2. A Stunt Involving Fake Money Got Him in The British Museum

Banksy created the ultimate stunt at London's famous Notting Hill Carnival, where thousands of Di-Faced Tenners were thrown into the crowd, which many attendees then tried to spend in local shops. Banksy produced the banknote in 2004, later revealing he printed £1m worth of them. As well as showing the late Princess Diana’s face instead of the Queen’s, the note was altered to read “Banksy of England” and the motto: “I promise to pay the bearer on demand the ultimate price.” Just last year, the fake banknote joined the historic collection of The British Museum.

3. He has created an opening sequence for The Simpsons

In 2010 the artist created the storyboards for the famous show's intro. The sequence is said to have been one of the most closely guarded secrets in US television and was quite controversial when it aired. You can watch it below:

4. He has been nominated for an Oscar

His 2010 documentary film Exit Through the Gift Shop was nominated for an Academy Award for Best Documentary Feature. The film also grossed $5,308,618 at the box office and featured fellow street-artists such as Shepard Fairey, Invader and Mr. Brainwash.

5. He's Made His Own Amusement Park

In 2015, in the eery, abandoned lido of Weston Super Mare, Banksy created his own apocalyptic style Disneyland-esque theme park called 'Dismaland'. The project included works by Banksy as well as 58 different artists he selected, and was far from a dreamland. Visitors were invited to come "eat cold chips to the sound of crying children" at what the artist referred to as "a family theme park unsuitable for children." Dismaland was open for about a month during the summer of 2015, selling 4,000 tickets per day for £3 each. To learn more about Dismaland, and Hang-Up's visit, click here.

One of Banksy's pieces on display at Dismaland depicting a paparazzi swarmed wreckage of Cinderella's coach crash.

A few years later, in 2017, the artist took on an even bigger project opening a hotel in Palestine! The Walled Off Hotel - a hotel overlooking the Israeli West Bank Wall aimed to bring tourism to Palestine and create a conversation around the conflict between Israel and Palestine, which Banksy was always very vocal about. Banksy's Hotel contains rooms curated by different artists, an art gallery and hosts music and art events promoting local artists whilst "offer(ing) the worst view in the world!" Banksy described it as a "a three-storey cure for fanaticism, with limited car parking”... Hang-Up again had the pleasure of visiting, to read more about it all click here.

7. One of His Artwork Was Once Sold with A House Attached

Back in 2007, when a couple was selling their home which featured an early Banksy mural on it, they quickly realised most of the potential buyers were planning to paint over the artwork. In order to protect the piece from being covered by the house's new owners, they decided to take it to Sotheby's Auction House instead. The piece was featured in the sale as "a mural with a house attached" and sold for £102,000.

As always thank you for reading this week's blog. Be sure to check our Banksy page for available works by the artist. Don't hesitate to get in touch should you have any questions or wish to request any of our Banksy catalogues.