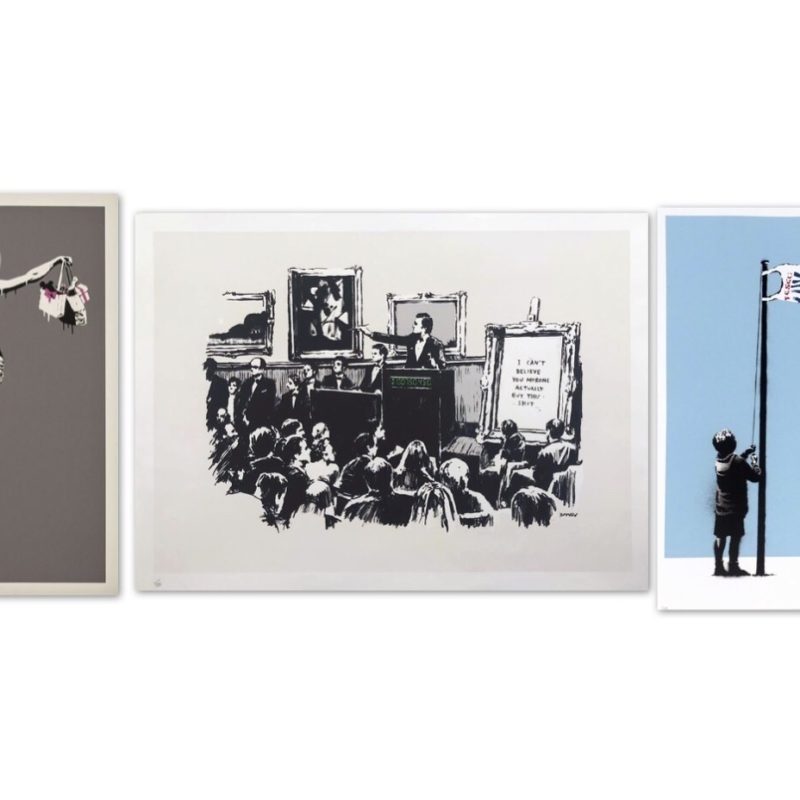 Banksy's street art is characteristic of conveying significant political, capitalist and humanist issues under a veil of British humour. By employing wit and irony, he captures the viewer's attention and probes them to consider the deeper meaning of his work. With Hang-Up's new exhibition TYPE just a couple of weeks away, now is the time to explore Banksy and his use of British humour. Read on to find out more...

In light of Hang-Up's upcoming exhibition TYPE, which is a collection of witty text-based artwork, this week we explore how Banksy merges graffiti and dark British humour in his renowned stencilling technique. Be sure to RSVP for TYPE if you haven't already by clicking HERE.

Let's take a look at some of the recurring images in his work, such as rats, monkeys and children, which are frequently accompanied with amusing slogans... 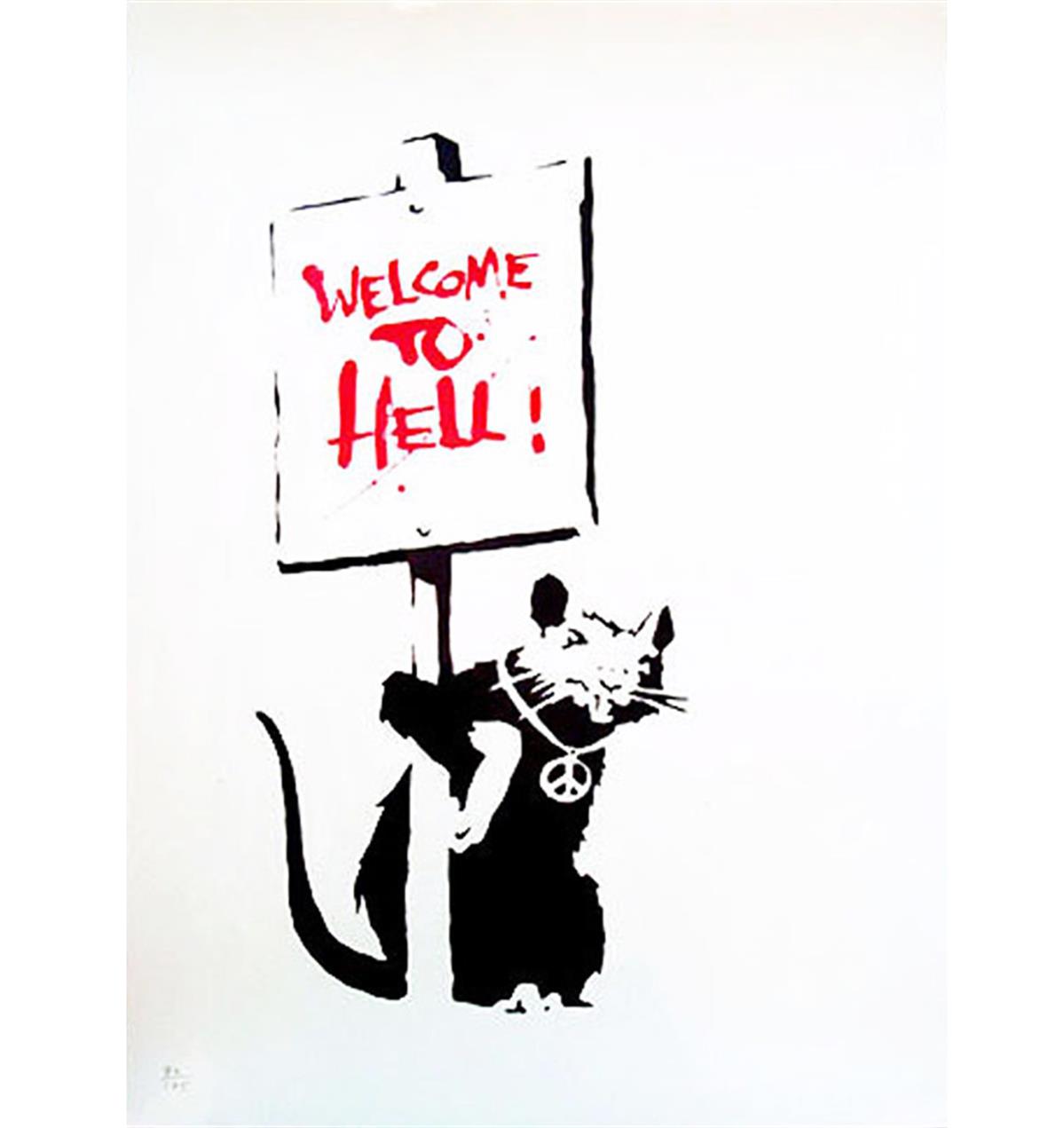 Above: Banksy, Welcome to Hell. Check out available Banksy editions by clicking HERE .

Happy Saturday! Check out our new in ‘Have a Nice Day’. It’s looking great in our bunker. @banksy 💥

Above: Banksy, Have A Nice Day

‘No Ball Games’ this sunny Saturday! 🙅🏼♀️🙌🏼 Come and see us, we are open until 6pm @banksy @hangupgallery

Above: Banksy, No Ball Games 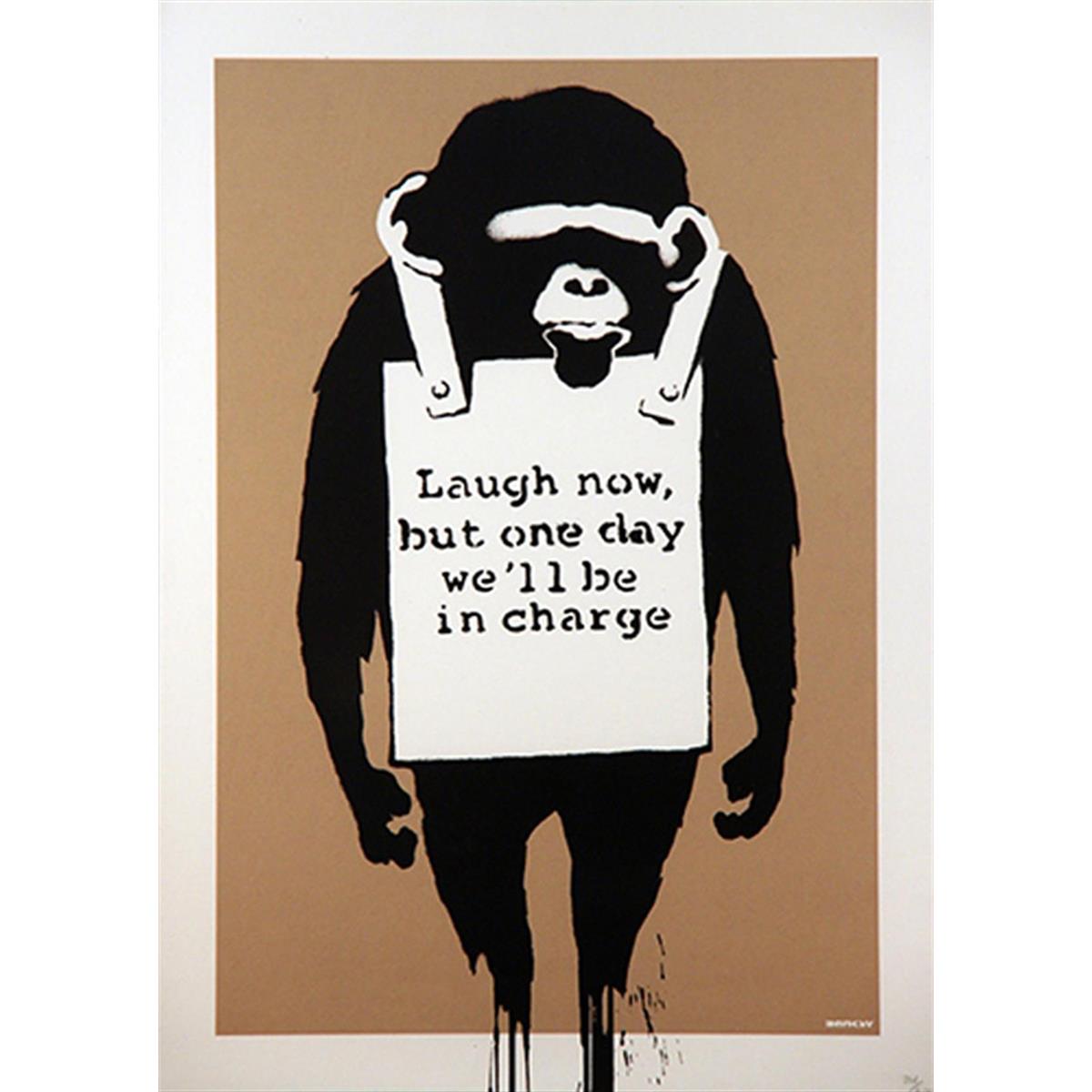 Banksy described graffiti as being "one of the few tools that you have if you have almost nothing, and even if you don't come up with a picture to cure world poverty you can make someone smile when they have a piss." His work is both comical and socially engaged as he uses humour as a powerful means to present a serious statement about the society and culture in which we live. He is able to make us laugh as he prompts a reflection on our perspective of the world. 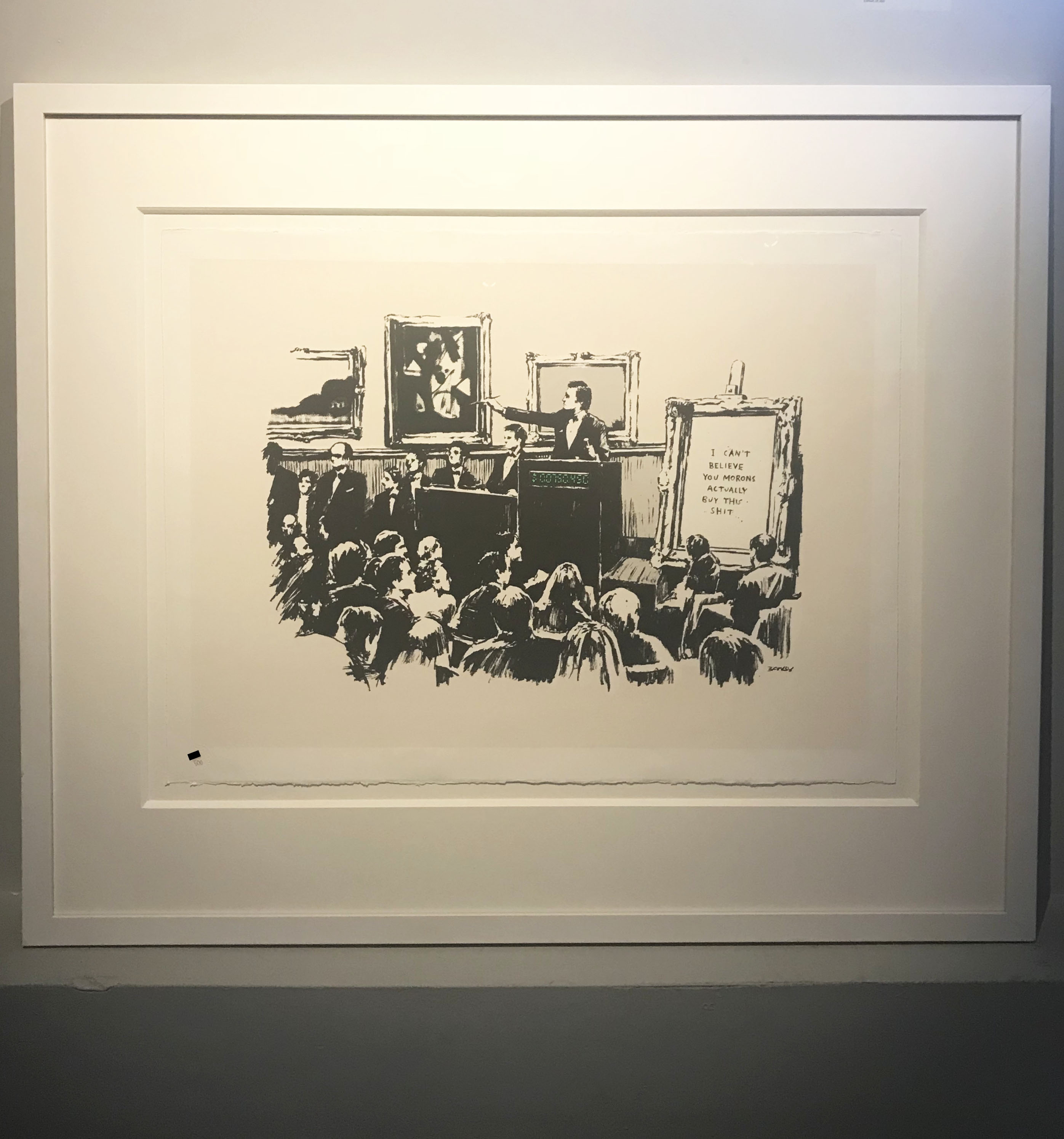 The artwork that is being sold in this piece, which says "I CAN'T BELIEVE YOU MORONS ACTUALLY BUY THIS SHIT"... need I say more?

Banksy's pieces that used to go for a few hundred pounds at best are now selling for tremendous sums. Over past years the stigma surrounding Banksy, and the desire to own his work, is rocketing.

In April 2007, Bonham's auction house in London saw Space Girl With Bird go for a staggering €479,926... over twenty times it's estimated sales price! Following this, Blur commissioned Banksy to design the cover of their album Think Tank. 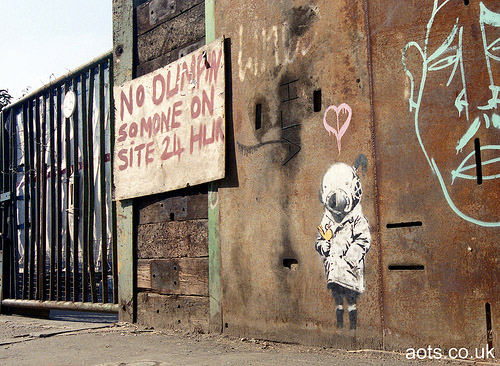 Above: Banksy, Space Girl With Bird 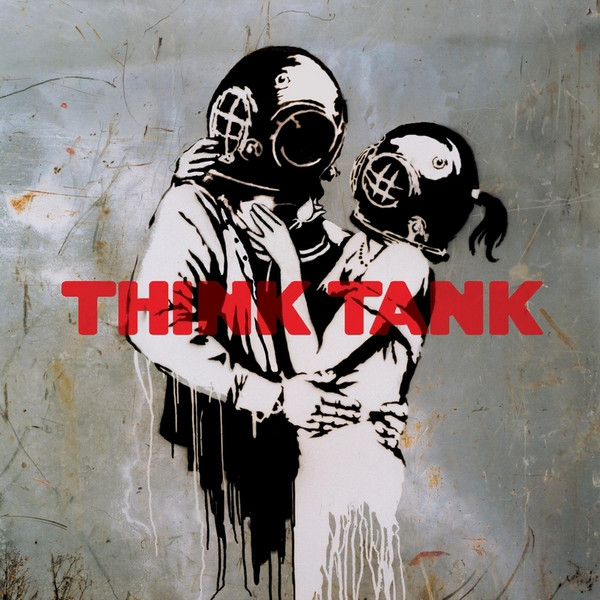 Above: Blur's Think Tank Album Artwork. - A stiking combination of text and image.

Check out our previous blog on Banksy's top auction results by clicking HERE.

Banksy as a Prankster

"Art should comfort the disturbed and disturb the comfortable"

Banksy's controversial character is prominent in his work. In an interview with the Independent, he said "If you have a statue in the city centre, you could go past it every day on your way to school and never even notice it, right - but as soon as someone puts a traffic cone on its head, you've made your own sculpture."

One of our favourite examples of Banksy's life as a prankster is when he replaced £10 notes with his own replicas... 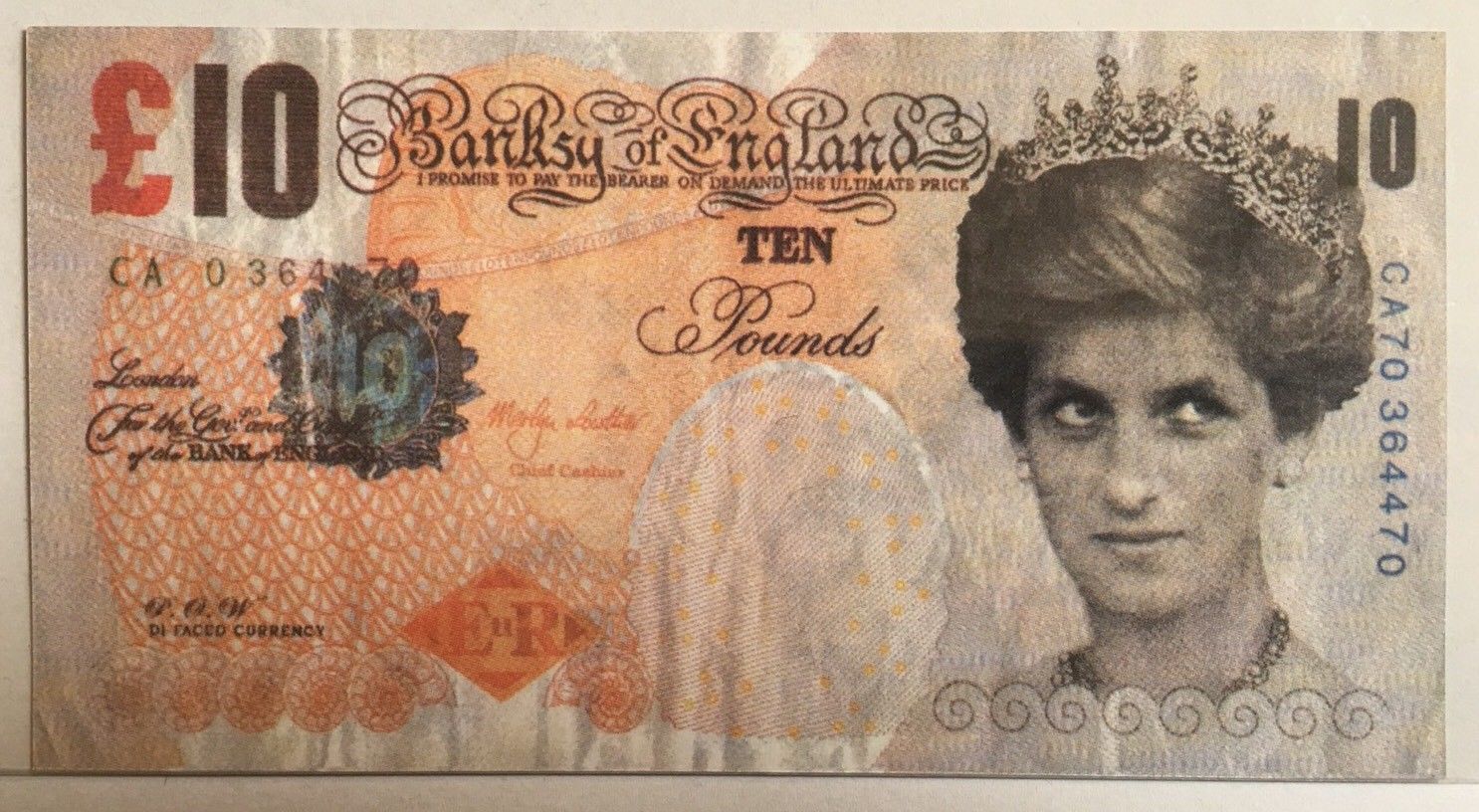 In 2004 Banksy reproduced £10 notes, but with his own spin. He replaced the portrait image of the Queen to one of Princess Diana. This money was distributed at a carnival where people tried to use them in local shops before realising they had no worth. The small print read "Banksy of England" instead of "Bank of England."

Banksy's more recent works include his 'Raise The Drawbridge' which appeared on Scott Street Bridge in Hull this January. Since Hull was the city with the highest percentage of people voting in favor of Brexit, many people deem this to be a political comment regarding the EU.

In January, we saw a new Banksy appear in Bethlehem in front of the Milk Groto Church...

This text-based work reads 'Peace On Earth,*Terms and conditions apply'.

Banksy's witty use of satire oozes from his artwork as he makes light of problems in contemporary society. As a political activist and street artist, he draws attention to issues in a controversial mannor. 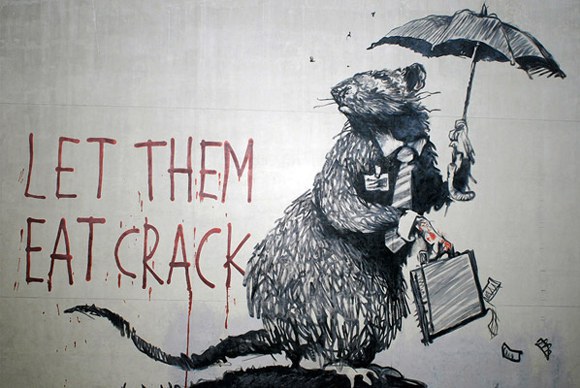 The above artwork depicts a giant rat who appears to have just sprayed the writing "LET THEM EAT CRACK", behind him. Banksy is critisizing Wall Street workers for only caring about themselves and discarding the lower classes.

We hope that you have enjoyed reading about Banksy's controversial, satyrical artworks that aim to heighten our awareness of the injustices in society and politics.

If you have any questions don't hesitate to contact me on katie@hanguppictures.com, or simply call the gallery on 02036674550.