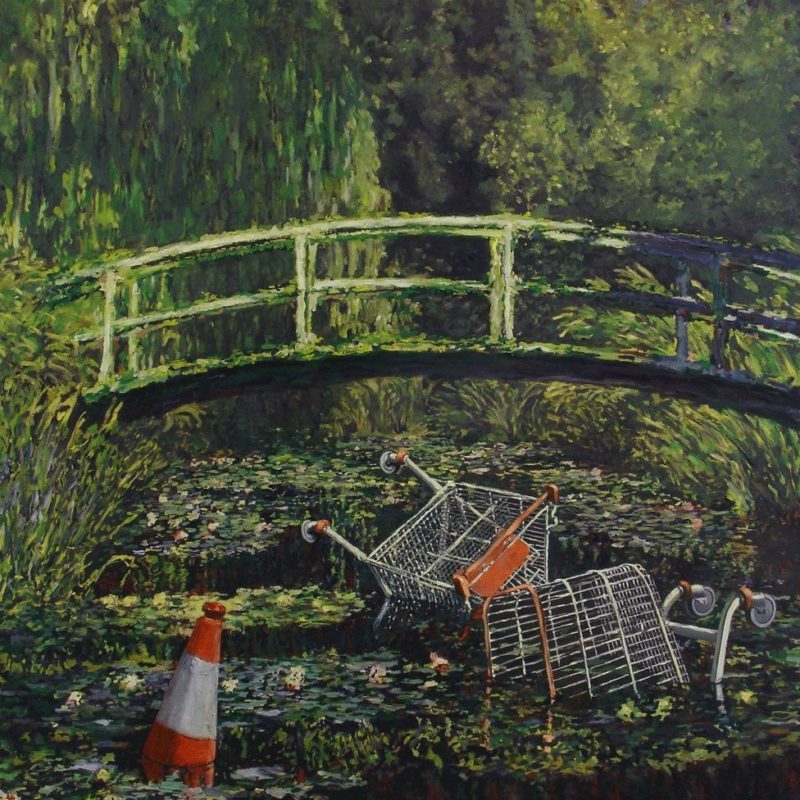 “The real damage done to our environment is not done by graffiti writers and drunken teenagers, but by big business. Exactly the people who put gold-framed pictures of landscapes on their walls and try to tell the rest of us how to behave.”

Banksy's re-imagining of Claude Monet’s impressionist masterpiece Bridge over a Pond of Water Lilies featuring traffic cones and discarded shopping carts, has sold at Sotheby’s for more than £7.5 million.

Titled Show Me the Monet, the playful artwork smashed auction estimates with ease and went on to become the second most expensive Banksy to sell at auction. The sale took place at Sotheby’s event in London on Wednesday the 21st of October and caused a near nine-minute battle between five collectors, according to the auction house.

Sotheby's employees pose with 'Show Me the Monet'

Created in 2005 as part of the artist's iconic series of Crude Oils, Banksy's reinterpretation of Monet's famous painting sees shopping trollies and a traffic cone added to the idyllic water lily scene of Monet's garden in Giverny. The series consists of works in which the artist subverts the language of art history to recreate renowned artworks with his own style and commentary. Other famous Crude Oils include Edward Hopper’s Nighthawks augmented by an angry man in Union Jack shorts who has just broken the bar window and the well-known reimagining of Andy Warhol’s Marilyn Monroe as Kate Moss.

Originally estimated between £3,500,000 and 5,000,000, the piece achieved a staggering price of £7,551,600. It is now the second most expensive artwork by the history-making artist sold at auction, following the sale of Devolved Parliament for more than £9.9 million last year.

Banksy's 'Show Me the Monet' on show at Sotheby's in London

“In one of his most important paintings, Banksy has taken Monet’s iconic depiction of the Japanese bridge in the Impressionist master’s famous garden at Giverny and transformed it into a modern-day fly-tipping spot. More canal than idyllic lily pond, Banksy litters Monet’s composition with discarded shopping trollies and a fluorescent orange traffic cone. Ever prescient as a voice of protest and social dissent, here Banksy shines a light on society’s disregard for the environment in favour of the wasteful excesses of consumerism.”

Another exciting auction result for Banksy no doubt. As always, thank you for reading. If you're interested in Banksy in the meantime don't hesitate to get in touch to request a catalogue.