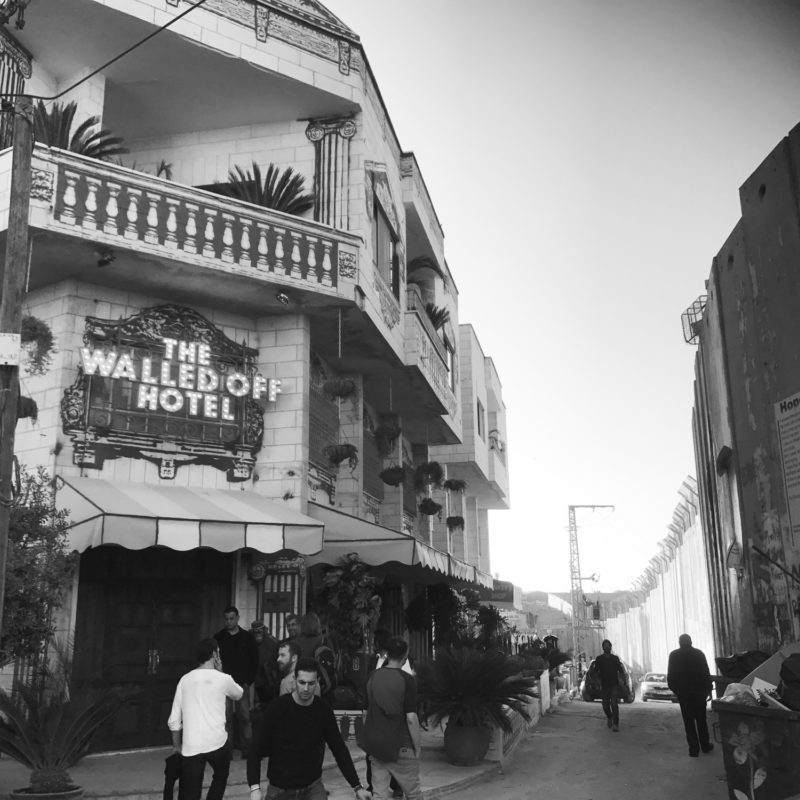 Happenings in Banksy's 'The Walled Off Hotel' this week

We've all had burning questions we've wanted answering about Banksy's new project since the news was released.

We've all had burning questions we've wanted answering about Banksy's new project since the news was released.

Last week, Hang-Up Gallery manager Carla Nizzola paid a visit to see The Walled Off Hotel. View some first-hand images below of the boutique Bethlehem hotel, erected in the shadow of the controversial concrete and barbed wire wall separating Israel from the Occupied Territories.

rooms offer a view of "the worst view in the world", as stated by the Hotel Manager - a local Palestinian, art collector and tour guide. The plush presidential

suite's balcony perhaps offers the eeriest view of all in high contrast, overlooking the wall and onto armed Israeli troops.

Above: Banksy's recognisable Monkey dressed as a hotel porter welcomes you to the front door.

Above Photo's with thanks to Rickard Anderson

For the hotel's opening party, the artist turned to Sir Elton John to provide the entertainment for the anticipated event. We were able to find a clip of the iconic musician performing, in a manner of speaking, via a live stream.

When asked about how he managed to get Elton John to perform, Banksy explained - "I don’t know much about piano players; I could only think of one. So, I wrote Elton John an email, and, rather amazingly, he agreed to play”.

The remote concerts don't stop there with rumours of Nine Inch Nails and Massive Attack are due to perform in the same way at the hotel.

Whilst photography was restricted within the hotel before public opening, thanks to Dominque Petrin and her Instagram

account, we've had a preview of Room 4- the room the Montreal-based artist was commissioned to design.

room represents “a bedroom in an English colony that’s on the verge of falling.”

The room boasts the best view of the wall. Once we move away from the glorified entrance, the

exterior surrounding the hotel emphasises the dichotomy of its location.

Artist due Block9 who specialise in radical set and environment design were also commissioned to deck out the 'budget room'. This war bunker inspired room is kitted out with bunk beds and surplus items from Israeli military barracks and costs as little as 30 USD per night.

This isn't the first time Banksy has drawn attention to the worsening situation in Palestine. He flew to Gaza

in 2015 to paint the strip with his iconic imagery, and created a short yet powerful video that highlights the plight of the ruined city:

Banksy also hijacked the West Bank Wall with several pieces back in 2005:

Much of the art he produced on the Wall visually subverts and draws attention to its nature as a barrier by incorporating images of escape — a girl being carried away by a bunch of balloons, a little boy painting a rope ladder.

Other pieces invoke a virtual reality that underlines the negation of humanity that the barrier represents — children in areas cut off from any access to the sea playing with sand buckets and spades on piles of rubble that look like sand, and corners of the wall peeled back to reveal imagined lush landscapes behind.

On the second floor of the Walled Off Hotel, Banksy has opened an art gallery dedicated to local Palestinian artists. An array of painting, mixed media, video installation and sculpture is spread across two gallery rooms - all of which are available to purchase. The Museum is perhaps the main attraction to the space, which offers a biography of the wall, in the form of testimonials, artefacts, photography, video and installation based on hard-hitting facts.

The hotel will be serving breakfast, lunch and afternoon tea. All food and drink will be served in traditional British crockery. The high tea includes a traditional tiered stack of scones, cream and jam, victoria sponge cake, egg and watercress sandwiches and millionaires shortbread - all baked in the hotel kitchen and made from fresh local produce.

The Walled Off Hotel is now taking bookings via the link below:

Rooms are almost all gone so do hurry before you miss your chance to soak in not only the clever, exquisite and informative boutique hotel, but meet the wonderful locals, listen to their stories and view first-hand the heavy current affairs which cease to end.