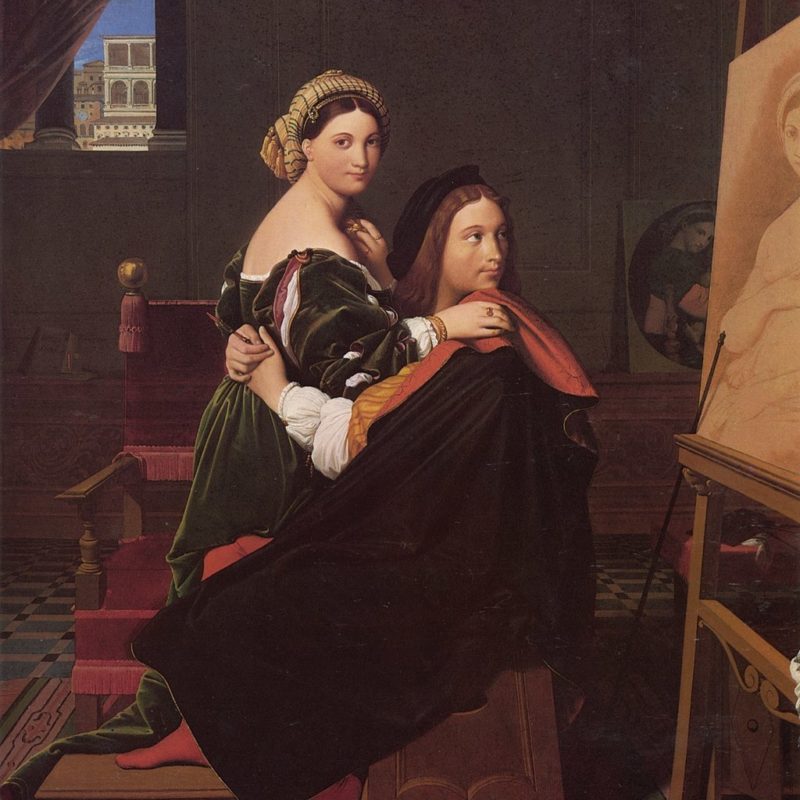 Back in the Renaissance, when the artists were the ‘lads’ of the day, Raphael might well have been a bit of a player. A hugely important figure in Rome (where he was even the chief architect of St Peter’s Basilica), he was engaged to Maria Bibbiena – they were the ultimate power couple of the time, since her father was a big name in the Medici court. However, it’s possible that Raphael’s heart belonged to another woman: La Fornarina, or the ‘baker’s daughter’. Margarita Luti has long been the rumoured mistress of the artist and, in 2005, restorers believed they’d found a clue which indicated she might be his secret wife. In his portrait, La Fornarina, she regards him with a guileless gaze, dressed only in a flimsy bit of material and a ribbon bearing his name. But restorers also found a tiny ring on her left hand, suggesting the two may have been secretly married. When Raphael died aged just 35, Luti joined a convent.

This duo – who had a passionate if fraught relationship – were each other’s muses throughout their careers. Twice married (they divorced in 1939 and then got back together a year later), their dysfunctional coupling involved numerous affairs and angry letters: In one, Kahlo wrote “how the hell do you manage to seduce so many women when you’re such an ugly son of a bitch?”.

But though Rivera was evidently a huge part of Kahlo’s life and work (she called him her ‘comrade’), there was another person even more central to her oeuvre – herself. This is the artist who purportedly once said “I am my own muse. I am the subject I know best. The subject I want to better.”

Thus, Rivera often appears as a secondary figure in her work, a representation of her emotions and actions: In Diego On My Mind, his portrait stares out from her forehead as tree routes grow from her garlanded head. In another work, The love embrace of the universe, the Earth (Mexico), Diego, me and Señor Xólot, she cradles him like a giant, grotesque man-baby – a stand-in for the children she lost through miscarriage.

Diego On My Mind (Self-portrait as Tehuana), oil on masonite, 1943.

Shields was still a teenager when she began hanging out with the coolest kids of the day – the artists of New York. A model and actress since before puberty, she starred as a child prostitute in the 1978 film Pretty Baby when she was just 12. Though she was Andy Warhol’s sometime muse (he described her as “the most beautiful living breathing doll I’ve ever seen” in The Andy Warhol Diaries and regularly followed her around Studio 54 taking her picture), it was Keith Haring with whom she would strike up a meaningful friendship. Notably, Haring created trademark cut-out hearts for a work in collaboration with the photographer Richard Avedon, in which a naked Shields posed as Haring’s dancing men cartwheeled and pirouetted around her. To celebrate the artist’s 60th birthday in 2018, Shields posted a photo on Instagram of herself with the framed wrapping paper that Haring had made for her 21st birthday.

Brooke Shields in her Manhattan home, with a Keith Haring heart above her fireplace.

Dishevelled, old and seemingly missing a nose, Grayson Perry’s muse doesn’t conform to traditional expectations. But the artist formed an enduring love for his teddy bear in childhood, when it saw him through a nasty bout of the measles (hence the name). Since then, Alan has morphed into a totemic, God-like symbol who is both beneficent and omnipresent – sanctified in bronzes, pots and tapestries. With Perry’s own desires projected on to it (for security and protection during his own self-discovery), Alan Measles is arguably a more sophisticated muse than the women of classical art, who acted simply as a conduit of their artists’ sexual desire.

Mikalene Thomas’s practice centres on the idea of the muse as inspiration – in the 2016 book and solo exhibition of the same name, she featured video, collage and photographs of friends, family and lovers, as well as herself. The unifying feature of her muses is their status as women of colour, with Thomas forging a much-needed place in art for the strong black women who surround her. These days, her fiancé Raquel Chevremont features in many of her pieces, but Thomas’s first ever muse was her mother, the late 1970s model Sandra Bush. Once destined for supermodel stardom, Bush had spiralled into alcohol and drugs addiction when her career didn’t go as planned. Despite a chequered mother/daughter relationship, Thomas allowed Bush to revisit some of the glamour of her old world through art, celebrating her mother with photographs featuring exuberant clothes and soft furnishings. In her 2012 short film Happy Birthday to a Beautiful Woman, Thomas crafted the most exquisite love letter to the woman who gave her life. When Bush died shortly after it was made, Thomas told Vogue, “I think she needed to see me finish the film. She felt responsible enough to stay with me up until that moment.”​​

Poster for Thomas' 2012 documentary 'Happy Birthday to a Beautiful Woman: A Portrait of My Mother'

If those muses have inspired some big feelings, these works should help you convey them to that special someone…