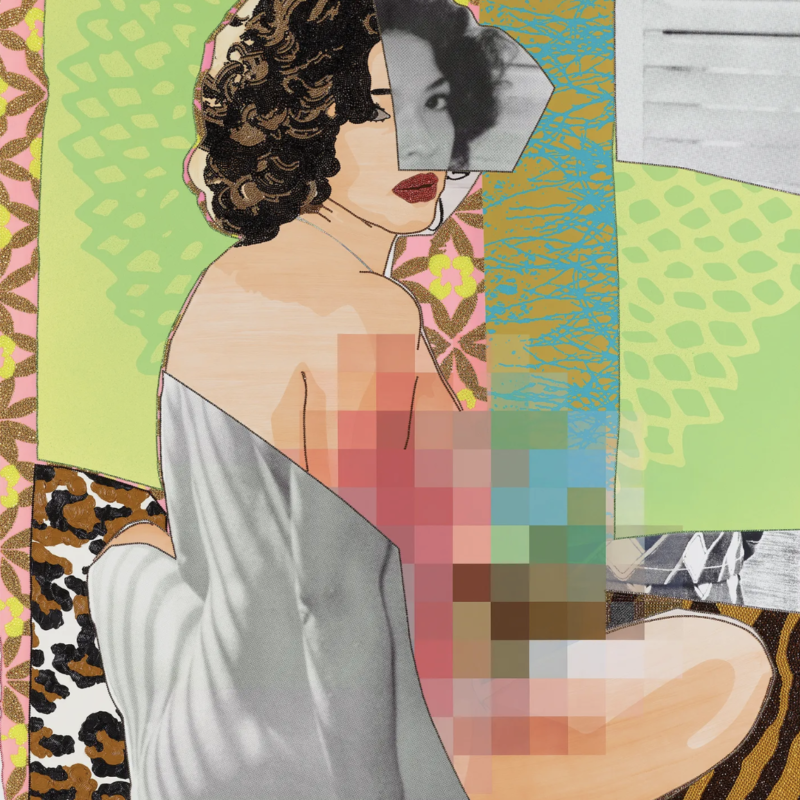 A couple of decades ago, the art world wasn’t really into people and landscapes. This was the time of Damien Hirst’s pickled sharks and Martin Creed’s lights going on and off, a time when traditional work was seen as a bit ‘basic’. Though Pop Art had made inroads, the art world had been that way for a while: the influence of abstract expressionism still loomed large. But, over the intervening years, something has changed.

With the world in turmoil, people are looking for human connections – and figurative pieces offer them in abundance. The gradual shift in viewer and collector preferences has hastened of late with the Covid pandemic and stirrings of an NFT backlash: post-lockdown, viewers want to feel connected with the real world and to see something tangible. In addition, an urgent need to reframe art’s traditional narrative has seen some of today’s most successful artists making agenda-setting pieces – such as Derrick Adam’s famous Floater series, which celebrated African Americans enjoying normal leisure pursuits (an area hitherto under-represented in art), or Mickalene Thomas’s powerful portraits venerating black women, their bodies and their unashamed sexuality.

The slow-burn that’s brought figurative art back into vogue has peaked with a flurry of exhibitions this year – from Lubaina Himid’s theatre-inspired pieces at London’s Tate Modern to Alex Katz’s retrospective at Madrid’s Museo Nacional Thyssen-Bornemisza. They follow hot on the heels of last year’s Mixing It Up: Painting Today at the Hayward Gallery, which gave the stage to contemporary artists and displayed a strong leaning towards figurative art.

With the world in turmoil, people are looking for human connections – and figurative pieces offer them in abundance.

The journey to this peak has been a while coming. Cast your mind back to the late 1990s and Tracey Emin’s infamous tent and unmade bed. With her controversial installations as a backdrop, it’s hard to imagine the about-turn that saw the artist move away from shocking sculptural pieces toward exquisite drawings and paintings of women. But back in 2012, an exhibition at Margate’s Turner Contemporary signalled a softer approach that would solidify into her favoured form of practice, with a series of raw, expressive gouache drawings of women.

Emin is open about her influences, and includes a roster of the world’s foremost figurative painters among them: She’s talked in the past of Turner’s sensuality and Schiele’s ability to convey raw emotion, and a recent exhibition at London’s Royal Academy saw her own renderings of women’s bodies juxtaposed against Edvard Munch’s anguished art. But, though her paintings sing with other artists’ influences, they also mark both a logical progression in her story and a societal step forward for the nude. After portraying her early struggles through film, photography, tapestry and installation, the paintings allow her to reclaim her story and take control by using her body for her own gain – both therapeutically and monetarily.

The North Gallery at Turner Contemporary, featuring artwork by Tracey Emin in her exhibition She Lay Down Deep Beneath the Sea (2012).

Post-lockdown, viewers want to feel connected with the real world and to see something tangible.

The American painter Kehinde Wiley is another artist who uses quasi-traditional figurative compositions to agenda-changing effect. Commandeering the style and backdrops of the Old Masters, he adds black, usually male figures into pictures that have traditionally conveyed status, prestige and wealth – the kind of pictures from which people of colour have long been excluded.

His intricate and delicate backdrops (of myriad flowers or fancy wallpaper) also question the narrative of fear and violence that has pervaded cultural commentary on black men. In doing so, Wiley conveys power to a marginalised sector of society – and his far-reaching influence has had huge impact.

Where Wiley turns tradition on its head, the Nigerian artist Wole Lagunju has taken a different approach, creating figurative pieces that reference the long cultural lineage of the Yoruba people and challenge imperialist norms in art in this way. Lagunju is linked to Onaism, a movement that reimagines the ideas and mediums of traditional Yoruba Art, an aesthetic tradition that stretches back more than 1,500 years: By putting objects such as Gelede masks (used in festivals venerating older women) on Western models, he invites viewers to see a different perspective on colonisation and cultural appropriation.

A modern lens – new thoughts on the human form

In the last few years, a new breed of figurative artists has emerged with a diverse set of very modern influences ranging from cartoons to gender fluidity. Together, these artists have created a new interpretation of the genre that’s thought-provoking, agenda-changing and original.

Leading the pack is Nina Chanel Abney, who has been making art for a decade and a half. She’s been garnering attention for her highly original pieces since her thesis show, which featured ‘Class of 2007’, a piece snapped up by the influential collectors Donald and Mera Rubbell and subsequently displayed in their high-profile exhibition 30 Americans. Reducing her cast of characters to a series of repetitive shapes that act as shorthand for body parts, Abney echoes the simplicity of cartoons while questioning our notions of race and gender identity.

Then there’s Olivia Sterling, a British artist who only graduated in 2020 but has since been much in demand for her cutesy pictures in ice cream colours: heavily influenced by cartoon graphics, they question the British notion of blackness and whiteness. Meanwhile, in the wake of Emin comes Emanuel de Carvalho, whose exquisite paintings in a traditional style have brought him much attention though he’s still studying at London’s Royal College of Art. Like Emin he’s commandeered his own body to take control of his narrative, this time exploring gender identity and fluidity.

What all three artists have in common is their ability to draw viewers in with their signature styles and prompt questions about the world we live in – and that seems like the perfect reason to celebrate figurative art’s resurgence.

To talk about works by Tracey Emin or Mickalene Thomas, get in touch.