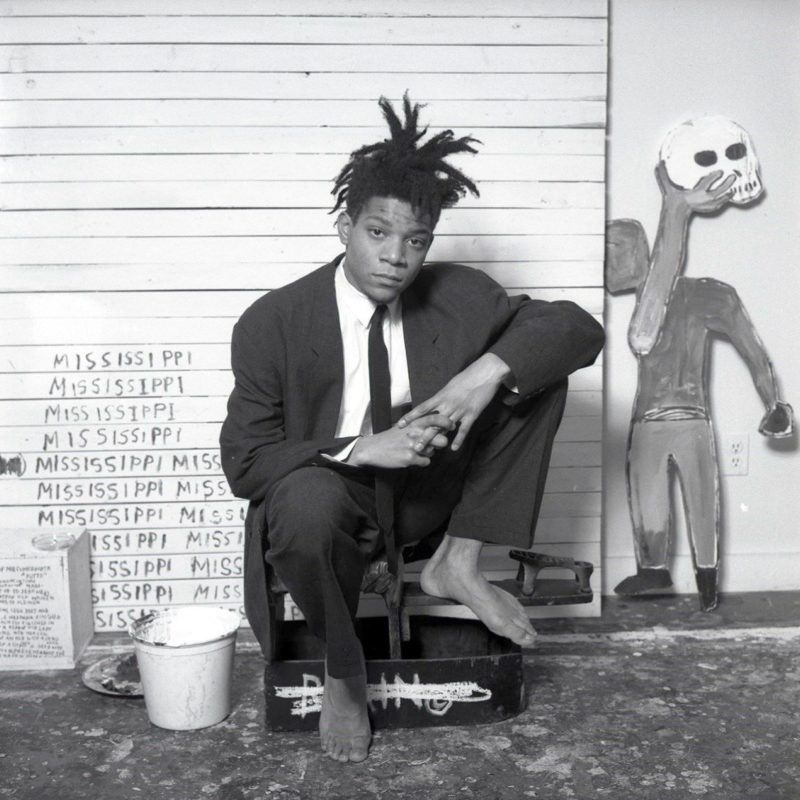 A high school drop-out who died from a heroin overdose at just 27, Jean-Michel Basquiat continues to be one of the most influential and sought after artists of his generation. Embodying the New Wave of art born in 1980s New York, he’s the movement’s most successful artist (in fact, his work Untitled (1982) which sold for $110.5 million in 2018, is the most expensive by any American artist). But what led to his meteoric rise – and why does he remain so important today? We take a look below…

Basquiat was just five when his mother – noticing his artistic talent – began to take him to sketch at the Brooklyn Museum. At times nurtured and encouraged, Basquiat nevertheless had a turbulent childhood – Matilde spent time in and out of mental institutions and his father was strict to the point of violence. Still, his early years would play an instrumental part in his later career: aged just seven, Basquiat was hit by a car while outside playing and, in a much-retold story, his mother gifted him a copy of the medical textbook Gray’s Anatomy while he was recovering in hospital. The book formed the creative basis for many of his works, including his first ever set of prints (entitled Anatomy).

By 17, Basquiat had left high school and home, and the next few years marked a period of sporadic homelessness during which he made money from begging. Despite his shadowy presence, Basquiat was already making a name (or pseudonym) for himself, with a series of graffiti works in conjunction with subway artist Al Diaz.

Appearing under the moniker SAMO (shorthand for ‘same old shit’), the pieces were thrown up on the streets of New York and centred around the satirical idea that SAMO was the answer to all of the world’s woes (‘SAMO© AS AN ALTERNATIVE TO GOD​​’, for example). Some of the pieces featured motifs that would reappear in Basquiat’s later work too, notably his trademark three-pointed crown.

The tags were, quite literally, everywhere (up to thirty could appear in one day): By 1978, they’d caught the attention of influential magazine Village Voice. But when Basquiat fell out with Diaz a couple of years later he buried SAMO too, tagging ‘SAMO IS DEAD’ across the city.

Head of Mandible and Ligaments of the Elbow from Anatomy by Jean-Michel Basquiat, 1982.

"The extent of Basquiat’s success would no doubt be impossible for an artist of lesser gifts. Not only does he possess a bold sense of colour and composition, but, in his best paintings, unlike many of his contemporaries, he maintains a fine balance between seemingly contradictory forces: control and spontaneity, menace and wit, urban imagery and primitivism."

An image of the artist in 'Boom for Real: The Late Teenage Years of Jean-Michel Basquiat'.

The death of SAMO was by no means a disaster for Basquiat, who was already a face on the erupting downtown arts scene. His experimental rock band, Gray (the name again referenced his beloved text book), played scenester haunts including Club 57 and Mudd Club; he had a cameo in the music video for Blondie’s Rapture; and he even briefly dated another rising star, Madonna.

It was a place in the seminal 1981 exhibition New York/New Wave that gave Basquiat his big break as an artist though. Held at PS1 and curated by Diego Cortez, the exhibition brought counter culture artists such as Keith Haring, Robert Mapplethorpe and Basquiat to the attention of the establishment – and it also highlighted the increasing gulf between the era’s graffiti writers and Basquiat’s unique style. His photogenic charisma added to his bankability, and Basquiat was soon in much demand with gallerists and art dealers.

In 1982, Basquiat put on his first American solo show at Annina Nosei, as well as five other solo exhibitions around the world. A much-lauded exhibition at the renowned Fun Gallery cemented the artist as an overnight sensation: he signed with art dealer du jour Mary Boone and, just a few years later, his paintings were selling for $25,000 each. His girlfriend at the time, Suzanne Mallouk, recalled in The Guardian, “we went from stealing bread on the way home from the Mudd Club and eating pasta to buying groceries at Dean & DeLuca; the fridge was full of pastries and caviar, we were drinking Cristal champagne.”

Repeated motifs and a quasi-naive style made Basquiat’s work instantly recognisable. There was something visceral about his scrawled mix of words and pictures that demanded a reaction from the viewer. Writing in the New York Times in 1985, Cathleen McGuigan remarked “The extent of Basquiat’s success would no doubt be impossible for an artist of lesser gifts. Not only does he possess a bold sense of colour and composition, but, in his best paintings, unlike many of his contemporaries, he maintains a fine balance between seemingly contradictory forces: control and spontaneity, menace and wit, urban imagery and primitivism.”

Jean-Michel Basquiat with Andy Warhol with works they created in collaboration, September 1985.

By the middle of the decade, Basquiat had made a firm friend in Andy Warhol, and the two began collaborating on work – to a rather lukewarm response (many believed that Warhol’s influence sanitised Basquiat’s raw and emotional output). By this time, Basquiat’s volatile personality and outlandish gestures (he held lavish, over-the-top parties and handed out $100 bills to the homeless) were becoming as famous as his art. On top of this, the artist was becoming increasingly reliant on drugs: Warhol documented Basquiat’s spiralling heroin addiction in his diary entries, revealing a troubled mind and suicidal thoughts; he is sometimes credited with helping Basquiat stave off full-scale dependency, though it’s clear that Basquiat also resented Warhol’s success.

Whatever the truth of the situation, after Warhol’s death in 1987, Basquiat spiralled out of control. A New York Times article reported that buyers and dealers would exchange drugs for his paintings, while friends spoke of his feelings of being simultaneously ridiculed and exploited by the art world. To make things worse, Basquiat’s own crown was beginning to slip as the quality of his output decreased in line with the uptick in his drug-taking.

After trying to get clean in both Hawaii and the Ivory Coast, Basquiat returned to New York in 1988 determined to quit painting. The final night of his life is harrowing: high and rambling, he was taken to a party by a couple of friends who wanted to keep an eye on him and get him out of the house. Another friend took him home later and then left; he was found dead the following afternoon. Immediately the vultures began to circle: supposed friends wanted to know how much their paintings were worth, and squabbles erupted between buyers, dealers and his estate.

It was a devastating end for an artist whose star had burned so bright, but Basquiat was never going to be forgotten. His themes resonate as powerfully now as four decades ago, which explains the continued demand for his work and his place in high profile collections (Jay-Z and Leonardo di Caprio both own Basquiats, and there are three paintings in the famed Rubell Collection). Just as in his lifetime, the secondary market for Basquiats continues to flourish and collaborations between his estate and high profile brands have ensured that the artist’s work remains in the public consciousness. Since his death, a host of museum shows have been dedicated to Basquiat, and his family have planned their own show drawn from their private collection which is slated to open early next year in New York. Given that respect and legitimacy are what Basquiat supposedly craved, it’s a happy ending of sorts.

To talk to Hang-Up about works by Basquiat, get in touch. 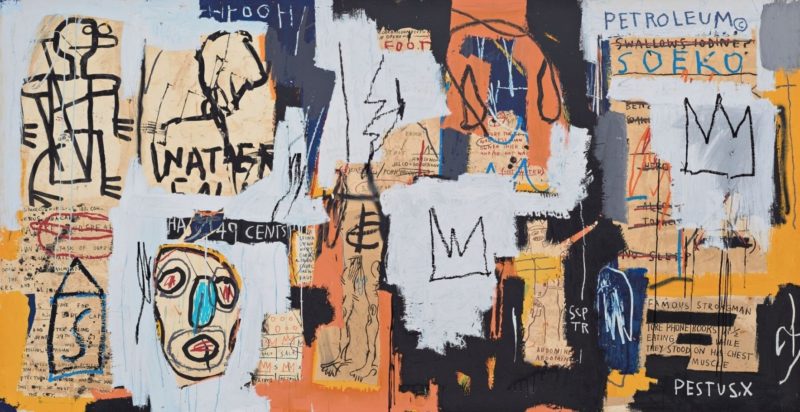