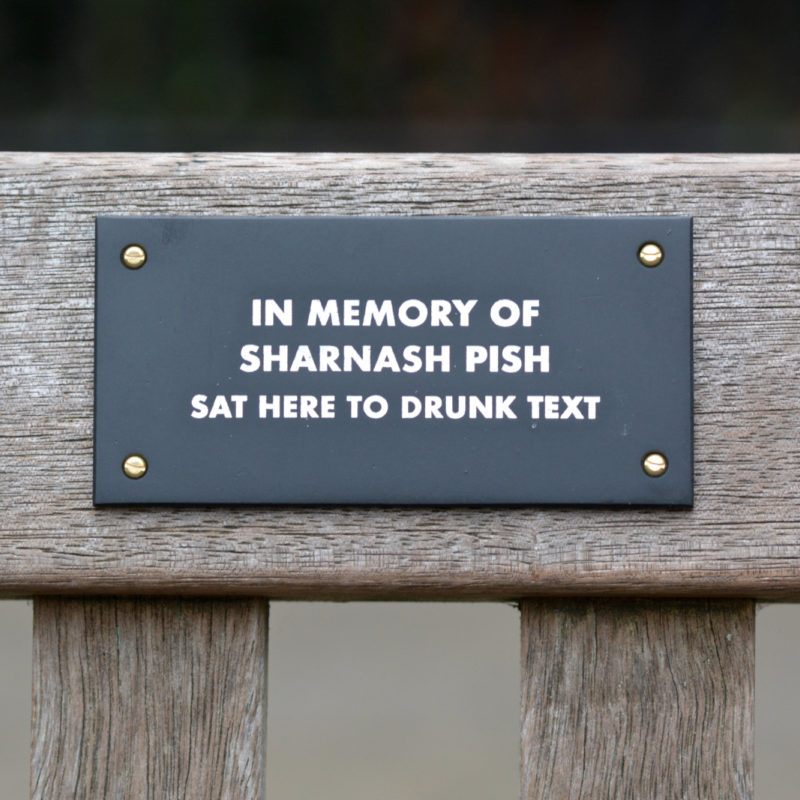 Look carefully at some of London’s park benches this winter, and you may notice plaques featuring homages to some unlikely-sounding characters – from the cheesily monikered Graham Raclette to alleged internet troll, Arabella Sweetbread. They’re part of artist Tim Fishlock’s In Memory Of project, which features brief quasi-tributes, inspired in part by flash fiction and the six-word novel.

Tim Fishlock’s irreverent memorial plaques are popping up on benches all around London.

“There is a famous example of the six word novel which is (falsely) attributed to Hemingway,” says the artist. “It goes, ‘For sale, baby’s shoes, never worn’. You expand upon and plump up the story yourself. I like that idea.”

On Fishlock’s chosen benches, his own micro stories invite those who’ve happened upon them to imagine a fictional past for his characters, and perhaps reflect on the complexity of grief.

“I think my attempts at saying something meaningful in as few words as possible speak to the ever-shortening attention spans we have honed through our use of social media. This particular idea grew out of my COLOSSEUM project: a series of paintings, prints and fly posters for imagined events that allowed me to indulge my passion for surrealistic double entendres, innuendo and absurdity”

The plates invite viewers to imagine a fictional past for the characters.

Though Hang-Up collectors may be more familiar with his gallery work, Fishlock has been making art for London’s streets for more than 20 years, most recently with the cast ice creams of his 99 Problems series. His first ever street project featured life-size metal casts of his ears, which he distributed around town.

“There are still a handful of those remaining,” says the artist. “Some are highlighted on guided walks around the capital.” (Including Hang-Up’s own – see more here).

Whether Fishlock’s plaques will remain in situ for quite as long remains to be seen – but he’s giving them a fighting chance by spreading them as far as Brighton, and he plans to leave some more wherever he goes on his holidays.

Keep an eye out for the memory plaques around London and the UK...

“With this kind of work, you hope for only two things,” he says. “One, the pieces stay up for a reasonable amount of time. And two, that people enjoy it. There’s nothing more to it than that.”

Want your own plaque? Simply join Fishlock's list below. One lucky subscriber will be selected by Thursday 24th.

Watch this space for exclusive Tim Fishlock news, coming soon. In the meantime, you can see the work we have for sale by the artist here.