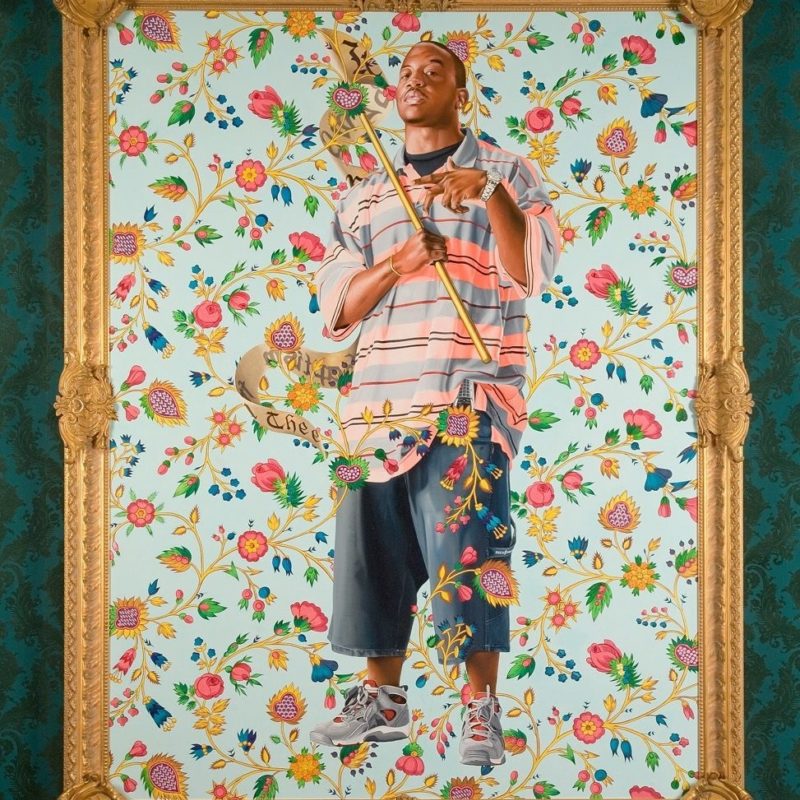 Add some colour to your grid, with these must-see accounts.

Exploring some of the key issues of our times, American artist Kehinde Wiley tackles race, gender and the underrepresentation of minorities in traditional art through his incredible portraits (including, famously, one of Barack Obama against a wall of blooming foliage). As well as his signature portraits, Wiley’s Instagram account reveals the breadth of his work: a triptych stained glass window for New York’s Moynihan Train Hall is displayed a few rows above a bronze sculpture of Kanye West. It’s also a window into Wiley’s colourful private life, with images of the artist hugging Naomi Campbell and Mariah Carey, and meeting British royalty.

First prize for topicality goes to Magda Archer, who recently postered her ‘is it over yet?’ murals around Shoreditch, and then onto her Insta grid. Archer’s cartoon aesthetic is the perfect pick-me-up for our times (especially when it comes accompanied by nail art and pictures of cute dogs sitting in Archer’s Marc Jacobs-collab bags), but there’s also plenty of room for political commentary in her pictures. Recent works displayed on Instagram question society’s obsession with injectables, as well as the UK government’s handling of the coronavirus pandemic.

Who better to follow online than viral sensation Joe Webb, a # favourite whose topical collages have been shared on social media hundreds of thousands of times? Webb’s Insta showcases both his art and his politics: since 2021 began, many of his posts have focused on climate change – a gondolier battles out-of-control rapids in Venice; a tourist couple look out over the Earth from above; and a gigantic, manicured woman’s head emerges from hazy rainforest. The ‘gram also reveals Webb as something of a polymath, with posts accompanied by his own musical compositions.

The world’s most famous street artist uses Instagram to authenticate his graffiti art – most recently, Bristol’s Aachoo!!, which features an old lady sneezing up one of the UK’s steepest streets. With 10.5 million followers (that’s more than double Kaws, Ai Weiwei and Jeff Koons put together), his account is evidence of his superstar status and comes complete with captions drenched in his signature dry wit. Banksy doesn’t have Facebook or Twitter, so it’s also the place to find short films associated with his political views and projects – from the launch of the migrant rescue boat MV Louise Michel to the use of face masks during the coronavirus pandemic.

Follow Magnus Gjoen for monthly (and sometimes more) doses of prettiness. Projects, found treasures and inspiration add up to one of art’s most aesthetically pleasing grids from this fashion-designer-turned-print maker, who specialises in blending the old with the new. Highlights include hand grenade sculptures cast from precious metals and adorned with snakes and butterflies, and skateboards decorated in intricate blue patterns straight from antique china.

At times cryptic and mysterious, Ai Weiwei’s Insta intersperses his work and process with glimpses of his private life (snapshots of his son, selfies with his cats and Zoom calls with his friends, including famous artists and curators). The effect is slightly disconcerting – a voyeuristic glimpse into someone else’s world – but it also serves as a comprehensive visual diary that’s an art work in itself. Expect tales of the artist’s legal battles and political views, including trails of his coronavirus documentary, Coronation.

Little squares of rainbow-coloured happiness fill the Instagram account of American artist Katherine Bernhardt, who is known for her bright paintings of pared-down cartoon characters, fruit and everyday paraphernalia. Alongside her own work, Bernhardt showcases pieces by other artists and inspirational finds – from gem stones to gigantic model dinosaurs.

A dose of purist perfection, David Shrigley’s Instagram features very little except details from his eye-popping art work, all with white backgrounds and the insouciant lines he’s renowned for. If you’re having a bad day, Shrigley’s squares should make you smile or at least nod along knowingly. Admittedly, these days there’s a slightly apocalyptic tone to his messaging (witness ‘only the artists will survive’ or ‘fast train to shitsville’), but we think that captures the public mood pretty well.

American artist Nina Chanel Abney has been making big waves across the Pond with her large-scale canvases packed with scenes from modern life, which are bold in every sense of the word. Her Instagram reveals a refreshingly unashamed approach to collabs (she’s been trailing a special edition UNO deck that we’d love to get our hands on), as well as her lockdown work – pieces for her Great Escape exhibition at New York’s Jack Shainman Gallery.